Bengaluru, June 4: Aprilia Racing's Aleix Espargaro, who had set the early pace in practice sessions, continued his good run at the Circuit de Catalunya in Barcelona as the Spaniard reset his own all time lap record to claim pole position for the Catalan GP.

In what was a three-way fight for pole in the ninth round of 2022 FIM MotoGP World Championship Aleix Espargaro's 1:38.742 saw him prevail by just 0.031sec over the Ducati Lenovo Team's Francesco Bagnaia. 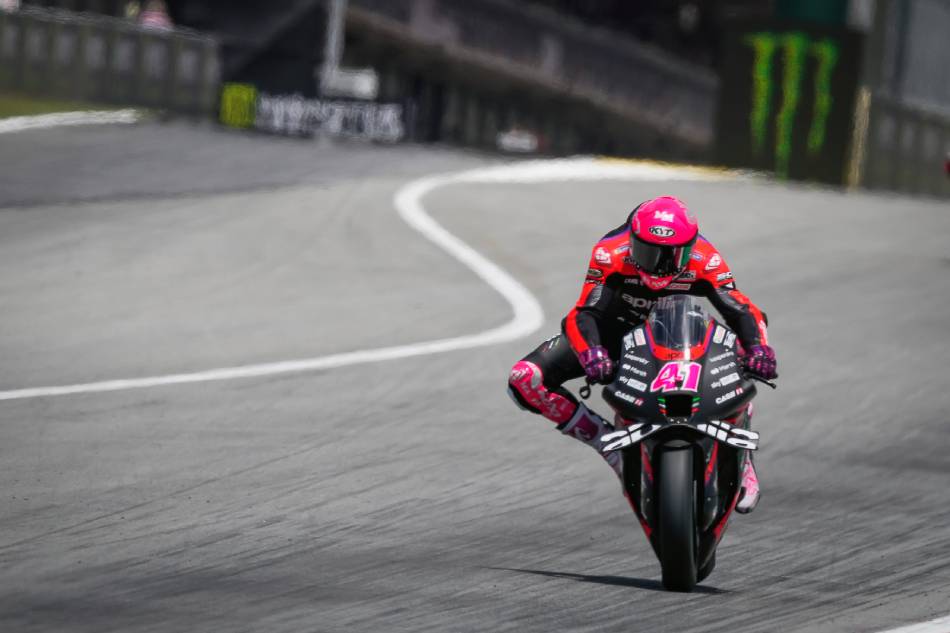 Row 2 will be all-Ducati, with Prima Pramac Racing's Johann Zarco fourth, his team-mate Jorge Martin sixth, and Gresini Racing MotoGP's Fabio Di Giannantonio between them on the starting grid.

The second Aprilia Racing entry, piloted by Maverick Vinales, will line up on the middle of Row 3.

It was very tight at the end of the first runs of Q2, with Quartararo top on a 1:39.055, Bagnaia second at just a hundredth of a second off the pace, and Aleix Espargaro only two thousandths slower again in third spot.

Enea Bastianini (Gresini Racing MotoGP) was the biggest name who got stuck in Q1. A flurry of red and orange on the timing screen saw Vinales sit first on a 1:39.216 and Marco Bezzecchi (Mooney VR46 Racing Team) second on a 1:39.240 a minute to go in the session, before the latter ran off at Turn 3.

Bastianini could only move up to third-fastest just before the chequered flag came out with a 1:39.246, and that would be all he had. Bezzecchi, however, also missed out when Takaaki Nakagami jumped into second spot with a 1:39.223.

Row 5 will be Bezzecchi, Bastianini, and Brad Binder (Red Bull KTM Factory Racing), the latter of whom took a detour through the Turn 10 gravel trap on his final lap.

Alex Marquez (LCR Honda Castrol) missed the session after a nasty-looking crash in FP4 which saw the Spaniard taken to the medical centre for an x-ray on his left wrist.

MotoGP warm-upp takes place on Sunday at 09:40 am local time 1.10pm IST), before the race itself later in the afternoon.

The lights will glow off for the Catalan GP at 2pm local time (5.30pm IST) on Sunday. Indian audience can catch all the action live on Eurosport channel. Watch out for it!