The Italian was the only rider who could get into the 1:19s in Q2 for for the Liqui Moly Motorrad Grand Prix Deutschlandthe with a 1:19.931, specifically - although the front row was still covered by less than a tenth of a second, proving just how close the category is.

Monster Energy Yamaha MotoGP rider Fabio Quartararo has given himself a good chance of extending his World Championship lead by claiming second on the starting grid for Sunday's race in Germany, and he will have Prima Pramac Racing's Johann Zarco alongside him also. 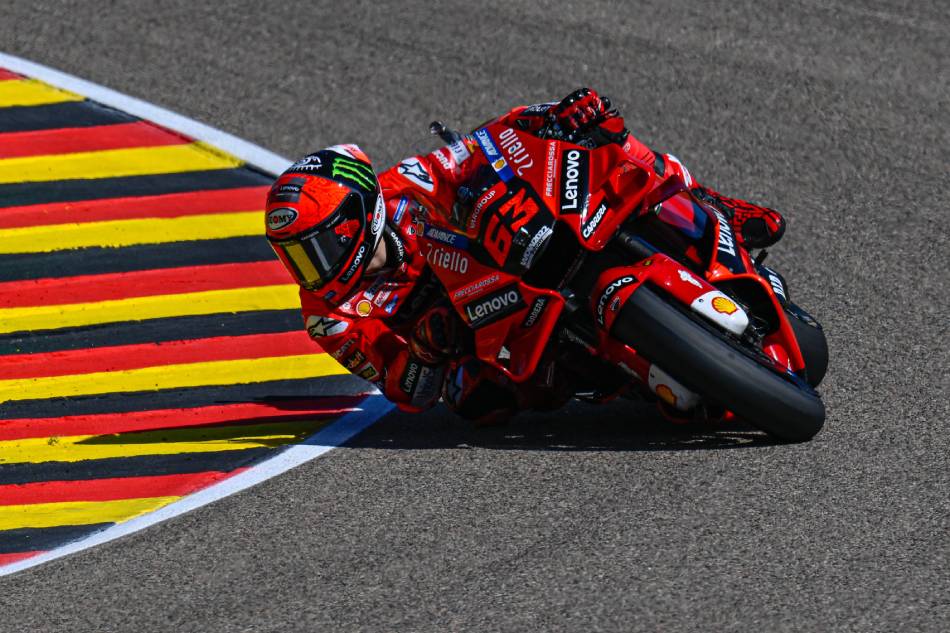 There were three different makes in the top four thanks in part to Aprilia Racing's Aleix Espargaro, but seven of the Bologna bullets made it into the second stanza of qualifying and six of those got into the top eight.

The Pecco show continues in Germany.

Di Giannantonio may have fallen into Q1 but he cleared that hurdle by topping that earlier qualifying session with a 1:20.307 which would have put him ninth in Q2 - if he had not gone faster anyway.

The Italian, on a GP21-model Desmosedici, was as high as third-quickest before settling in fifth on the grid on a 1:20.128. As it stands, he will start between Aleix Espargaro and Miller, the latter of whom was sixth on a 1:20.150, but the Australian still faces an investigation into allegedly crashing under a yellow flag in FP4.

For now, seventh on the grid is Marini and eighth is Martin, even though the Spaniard was only 0.288sec slower than pole. Maverick Vinales (Aprilia Racing) also made row 3 while 10th went to Takaaki Nakagami (LCR Honda Idemitsu), who crashed late at Turn 1. Q1 graduate Marco Bezzecchi (Mooney VR46 Racing Team) took 11th all-told and Joan Mir (Tea Suzuki Ecstar) is also on row 4.

Pol Espargaro was an agonising 0.004sec away from Bezzecchi's 1:20.600 with his late flying lap in Q1, and the Repsol Honda rider will therefore start at the head of row 5 of the grid.