Mack is back! Vinales tops Day 1 at Misano

Bengaluru, September 18: Maverick Vinales made some headlines when he first tested the RS-GP at the Misano World Circuit recently and on Day 1 at the San Marino Grand Prix, the Aprilia Racing Team Gresini rider made a few more.

The number 12 was quickest out the blocks in FP1 before the rain came down in the final few minutes, and with conditions remaining damp in FP2 he remained the fastest on Friday.

FIM MotoGP reigning Champion Joan Mir of Team Suzuki Ecstar was in close attendance, however, 0.080sec off the top as he prepares to make his 100th Grand Prix start on Sunday, with MotorLand winner Francesco Bagnaia (Ducati Lenovo Team) starting his home GP in third. 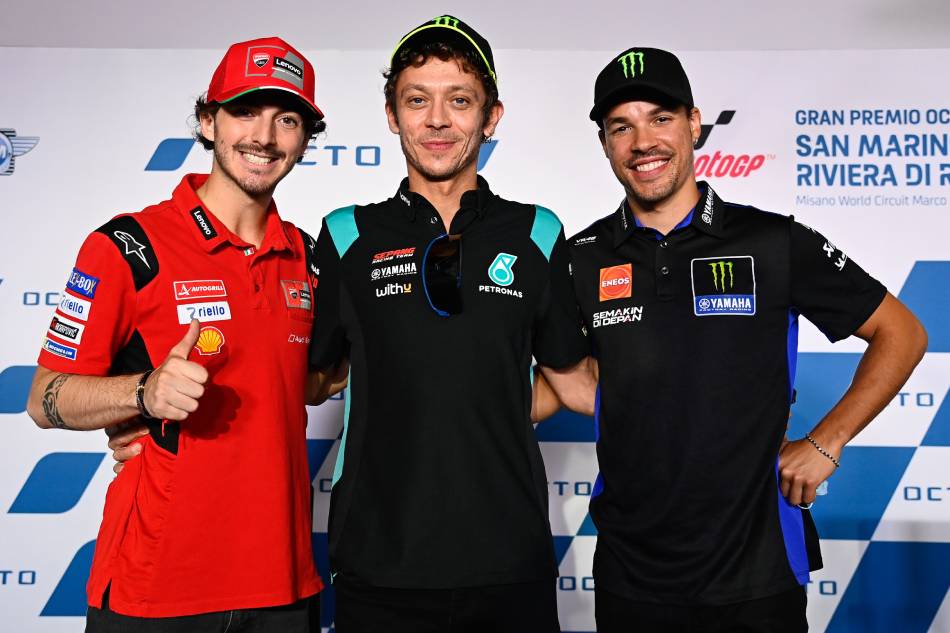 San Marino GP: Bagnaia leads the cavalry on to Misano

MotoGP will see wheels back on the ground on Saturday morning for FP3. Make sure you tune in for it at 9.55am local time (1.25pm IST).

Qualifying then starts from 2.10pm local time (5.40pm IST) with the grid for a pivotal race in the title fight sure to prove hard-fought.

Due to the weather, there was no change in the provisional Q2 places with Vinales still leading the charge ahead of Mir and the two Ducatis -- Bagnaia and Miller. Alex Rins (Team Suzuki Ecstar) is also in there ahead of Pol Espargaro (Repsol Honda Team).

After the sun teased a drier afternoon session, the rain began to fall once again meaning that there would be no changes in the Q2 places, but it did offer riders a chance to get some wet weather practice in ahead of what could end up being a rainy weekend in Misano, which could suit Ducati down to the ground.

Mir had a solid showing, with laptimes hovering around ten seconds off those set in FP1. The Suzuki rider's strong start in both sessions sends a good warning shot as he arrives fresh from the podium in Aragon.

Bagnaia was the first in a Borgo Panigale 3-4 as was less than half a tenth off the number 63, with Alex Rins (Team Suzuki Ecstar) finding some speed to complete the top five.

Elsewhere, Fabio Quartararo (Monster Energy Yamaha MotoGP) will be keeping a close eye on the weather forecast for the weekend with the runaway 2021 FIM MotoGP World Championship leader struggling in the tough conditions and finishing way back in P7.

However, the Championship leader will surely have more in the locker at a venue Yamaha have dominated eight times.

For some, there could be a rain dance for FP3 as they look to move through, but with the weather changing quickly it's anyone's guess.