Imola, April 24: Max Verstappen surged to victory in the Emilia Romagna Grand Prix and gained ground on Charles Leclerc, who had a costly late spin.

Having given up on catching race leader Verstappen, Leclerc pitted from third for soft tyres in a bid to take the extra point for the fastest lap away from the Dutchman.

However, the Ferrari driver lost control at the Variante Alta and sustained damage that forced him to pit again – enabling Lando Norris to take third. 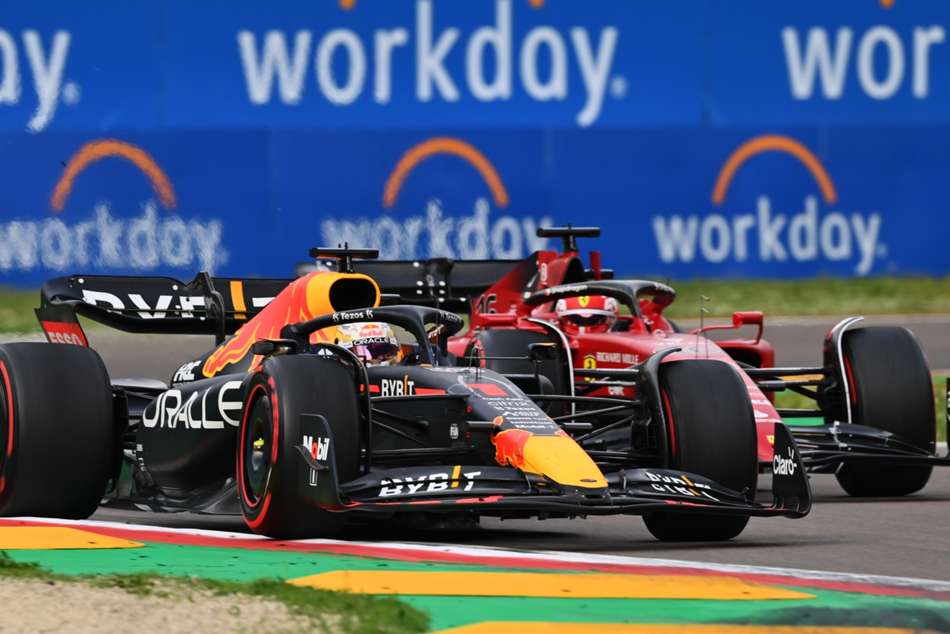 Leclerc dropped to ninth but recovered to sixth as his championship lead was cut by 18 points, with Sergio Perez making it a Red Bull one-two.

Verstappen started on pole following his success in Saturday's sprint race and he never surrendered that position, though Leclerc slid down from second to fourth on a wet opening lap.

The safety car was deployed after Carlos Sainz span out following contact with Daniel Ricciardo, who was nudged from behind by Valtteri Bottas at the Variante Tamburello.

Leclerc got past Lando Norris on lap eight but was already six seconds adrift of Verstappen, with the Dutchman only building on his lead after changing for slick tyres on lap 20.

Perez, who quickly regained second after losing out to Leclerc in the pits, produced some excellent defence to keep the Ferrari at bay despite a trip across the grass before DRS was belatedly enabled just after the halfway point.

Leclerc set the fastest lap but ended up losing track position when he span into the barriers on lap 53, with Verstappen taking the extra point after changing to soft tyres.

Having been a non-factor in Saturday's sprint race, seven-time champion Lewis Hamilton started 14th. That was where he finished too, as he failed to find a way past Pierre Gasly.

He suffered the ignominy of being lapped by Verstappen on lap 40 while George Russell was able to take a commendable fourth.

Aston Martin off the mark

Alexander Albon finishing 10th at the Australian Grand Prix meant Aston Martin were the only team without a point this season.

Sebastian Vettel and Lance Stroll combined to ensure that did not go on any longer. Vettel finished eighth, while Stroll was 10th to move the team above Williams in the constructors' standings.