Bengaluru/Doha, February 25: Maverick Vinales of Monster Energy Yamaha MotoGP ended the Qatar Test at the top with a 1:53.858 on the final day under the lights at the Losail International Circuit.

If there is one thing 2020 pre-season has taught us to expect, it is some serious speed from Yamaha and Suzuki.

At the close of testing before the first race weekend of the year that remained entirely true, with Vinales heading the pile.

And Franco Morbidelli (Petronas Yamaha SRT) was not too far behind, just 0.033 in arrears, with Alex Rins (Team Suzuki Ecstar) in third a couple of tenths back.

Fabio Quartararo (Petronas Yamaha SRT), who was on top on Day 2, finished fourth as the inline-fours came out on top. 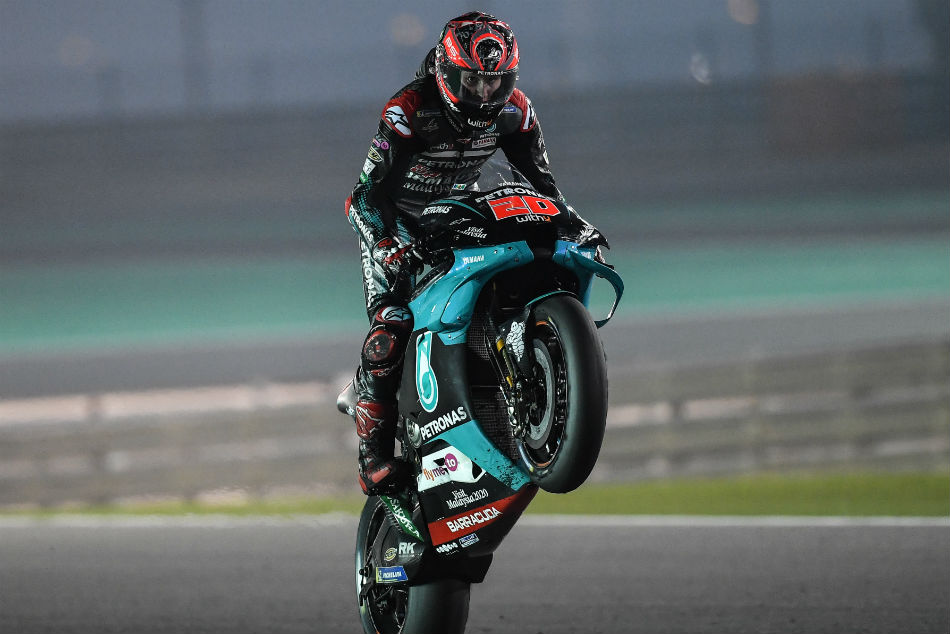 Overall it was a great test for Yamaha, but there will be slight worry that Quartararo suffered technical failures on last two days in addition to Valentino Rossi's (Monster Energy Yamaha MotoGP) Turn 2 crash on the final day.

The top 18 were split by less than a second, so let us bring on March 8 when the 2020 FIM MotoGP World Championship will get underway!

The main job for Team Suzuki Ecstar, meanwhile, was to continue comparing the standard and new chassis, nothing radically new was on the GSX-RRs of Rins and Joan Mir as they focused on the finer detail.

Along with Yamaha, Suzuki look arguably in the best shape ahead of the Qatar GP with both the Sepang and Qatar Tests proving very good for the factory.

Miller on the move

Breaking the domination in the top five was a job for Jack Miller (Pramac Racing) on Day 3. The Australian was the top Ducati in fifth, 0.247 off the top, and said he completed a couple of time attacks and two longer runs.

The number 43 is "quietly confident" heading into the opening weekend of the season, and clocked the fastest-ever top speed at Losail, a ridiculous 355 km/h.

It was a busy and intriguing day for reigning champions Honda as Marc Marquez (Repsol Honda Team) started with three bikes in his garage, one of those being Takaaki Nakagami's (LCR Honda Idemitsu) 2019 RC213V.

Marquez was seventh overall, with Nakagami less than a tenth off.

One of the riders of the test based on time-sheets alone has to be Red Bull KTM Factory Racing rookie Brad Binder, however.

As his team-mate Pol Espargaro explained earlier in the test, KTM didn't have anything new to try on Day 3 as they do not want to start getting lost.