Vinales turns the tables on Day 2 in Valencia test

By Sajith B Warrier
Updated: Thursday, November 21, 2019, 11:11 [IST]
oi-Sajith B Warrier
Maverick Vinales put in 67 laps on the final day of testing, topping the time sheets.

Bengaluru, November 21: Maverick Vinales (Monster Energy Yamaha MotoGP) topped Day 2 of the Valencia test and it was once again a Yamaha 1-2-3, with the trio at the top within three tenths.

Vinales was the only rider in the 1:29s - true of Fabio Quartararo (Petronas Yamaha SRT) at the weekend - and the number 12 narrowly beat the Frenchman's pole time on Wednesday.

Quartararo was 0.164 in arrears, with Franco Morbidelli (Petronas Yamaha SRT) within 0.265 of the top. Honda's Cal Crutchlow (LCR Honda Castrol) was the only other man within half a second... 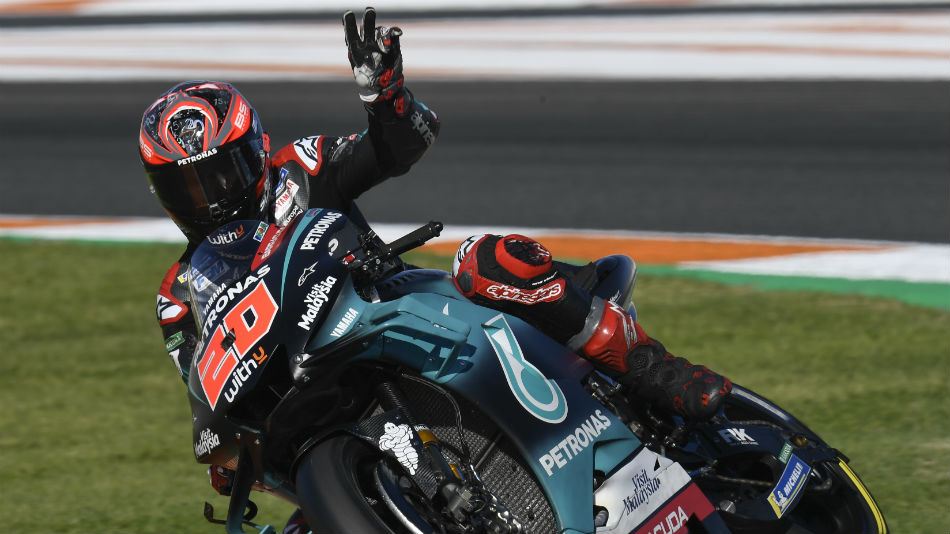 Quartararo a cut above rest on Day 1 of Valencia test

Viñales fastest was set on the 'new' bike - with a different chassis and new engine - and the Spaniard put in 67 laps on the final day of testing, topping the timesheets with his 56th. Teammate Valentino Rossi was once again ninth, and 'The Doctor' did 68 laps on Wednesday. He was within 0.968 of the top and suffered a mechanical problem in the afternoon, but got back out.

That's it from Valencia and the first test of 2020 - with Jerez up next as a two-day test takes place begins on Monday (November 24).

Who will reign there? Will we see more engines, chassis updates, more aero and even more tech on show? And can Yamaha keep their dominion so far? Wait and watch!

Reigning champion Marc Marquez (Repsol Honda Team) made some more Honda headlines, however. The number 93 rode around with his brother and premiered the aero seen on Crutchlow, with the all-black Honda breaking cover bearing a 93 in the afternoon, and he ended the day in seventh after 71 laps.

He also suffered a failed getaway earlier in the day, and his teammate for the test - in the garage at least - also suffered an issue as Stefan Bradl ground to a halt. Nevertheless the German was able to complete 53 laps by the end of play.

The Ducati Team's Andrea Dovizioso, meanwhile, was focused on gathering more information on what they tested on Day 1, one big thing of note being a new chassis.

Australian Jack Miller was fastest Ducati in 10th, just ahead of Dovizioso. The Pramac Racing man explained he would been doing back-to-back comparisons with the first version of the 2020 machines.

Alex Marquez, on the other side of the LCR Honda garage, was the only man to do more laps.

The rookie on his No.73 bike did 79 laps on his second day as an HRC MotoGP rider, shaving six tenths off his time from the opening day.

Team Suzuki Ecstar were fifth and sixth. The new engine previously having been put through its paces by test rider Sylvain Guintoli was a big focus for the Hamamatsu factory as they look for a step forward in terms of outright speed, and Joan Mir was the quickest Suzuki on Day 2.