Berlin, April 22: Petra Kvitova and Karolina Pliskova both recorded singles victories as Czech Republic finished day one of their Fed Cup semi-final with Germany 2-0 ahead.

Both Czech players recorded straight-set victories on the indoor clay surface, and the 10-time champions know one more point will see them progress to the final.

Defending champions United States are level with France in the other tie, Kristina Mladenovic making it 1-1 after Sloane Stephens had overcome Pauline Parmentier in a see-saw opening battle.

Meanwhile, there were a host of big names involved in the play-offs further down the competition.

Simona Halep, Garbine Muguruza and Jelena Ostapenko all came through without any problems, but only the latter claimed a straight-sets victory. 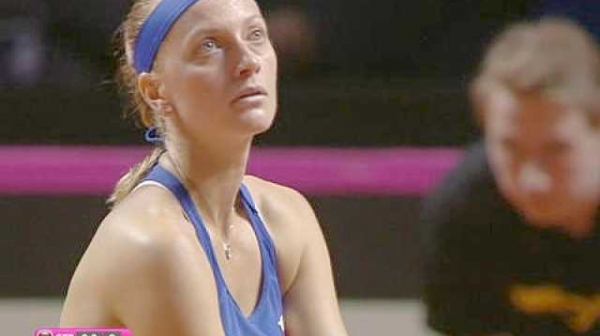 Fed Cup: Highlights from day one of the semifinals

Kvitova found herself 3-1 down in the opening set with Julia Goerges, but the world number 10 rattled off five in-a-row to move ahead in the match.

She did not look back from there as she completed a 6-3 6-2 victory, the second set taking just 28 minutes.

Pliskova followed suit against former world number one Angelique Kerber as the Czechs – who have won five of the last six editions of the competition – took control ahead of the doubles on Sunday.

🇨🇿 @KaPliskova produces a sublime performance to defeat Angelique Kerber 75 63 and give the Czechs a 2-0 lead in the #FedCup semifinal!!

HONOURS EVEN IN FRANCE

Stephens beat Parmentier 7-6 (7-3) 7-5 but it was a tough opener for the holders in front of a raucous home crowd that included former world No 1 Amelie Mauresmo.

Parmentier raced out to a 5-2 lead in the opener but failed to take five set-point opportunities, allowing her opponent to rally before taking the lead courtesy of a tie-break.

Stephens was pushed hard in the second set too, fighting back from a break down to clinch victory with a crunching forehand winner in the 12th game.

However, team-mate Coco Vandeweghe blew a one-set lead against Mladenovic, who snapped her opponent's 13-rubber winning streak in the competition with an impressive 1-6 6-3 6-2 triumph.

The pressure was on world number one Simona Halep as she opened up for Romania, and she survived a scare to ease past Switzerland's Viktorija Golubic 6-3 1-6 6-1.

Halep was broken in the first game of the match and lost five in a row in the second set, but she dug deep to give Romania a 1-0 advantage, with Irina-Camelia Begu putting them in the driving seat for a World Group place next year with victory over Timea Bacsinszky.

🇷🇴1⃣🆚0⃣🇨🇭
World No.1 @Simona_Halep beats Viktorija Golubic 6-3 1-6 6-1 in the opening rubber of tie to give Romania the early lead.#FedCup pic.twitter.com/RVMWDWdAKP