Minsk, November 13: Shelby Rogers and CoCo Vandeweghe combined to steer the United States to a first Fed Cup victory since 2000, beating Belarus 3-2 in the final on Sunday (November 12).

With the match level at 1-1 heading into the second day, Vandeweghe put the US in the driving seat thanks to a straight-sets win against Aryna Sabalenka in her singles rubber.

Aliaksandra Sasnovich then forced the match to a deciding rubber by coming from behind to get the better of the out-of-form Sloane Stephens, who has not won since claiming the US Open title, 4-6 6-2 8-6.

But it was the Americans who eventually won through, as Vandeweghe teamed with the fresh legs of Rogers to triumph over Sabalenka and Sasnovich in the doubles, winning 6-3 7-6 (7-3).

Having defeated Sasnovich on Saturday (November 11), Vandeweghe was triumphant again in the first meeting of the day, downing Sabalenka 7-6 (7-5) 6-1 as the home hope's challenge faded badly.

That left Stephens with the opportunity to win it for the US, who have waited 17 years to add to their 17 Fed Cup crowns.

The 24-year-old started brightly and broke to love in game three, which laid the foundation for a one-set lead. 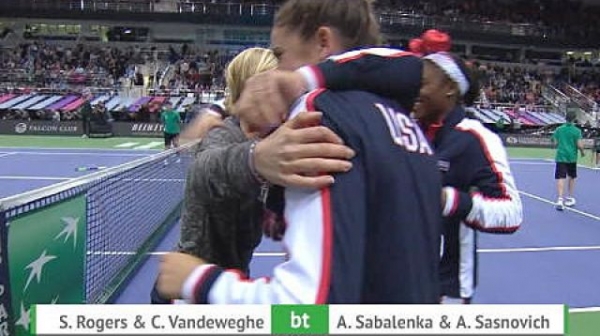 Stephens looked set to retain the upper hand as two break-point openings were carved out in the opening game of the second set, but after she failed to take either, the American's fortunes took a downward turn.

Sasnovich broke in consecutive games en route to levelling the rubber, and the American threw away a 5-2 lead in losing the deciding set.

Stephens' shortcomings would not prove costly, however, as Rogers and Vandeweghe turned in an accomplished display to put the match to bed.

A run of four consecutive game victories at the end of the opening set had the US in control, before they emerged triumphant from a second that saw six breaks of serve before the tie-break.