New York, September 12: Emma Raducanu and Leylah Fernandez had the biggest moments of their careers – their lives, surely – coming up in a matter of moments, but both of the teenage sensations seemed calm and collected as they fulfilled some final media duties prior to heading out onto court at Arthur Ashe Stadium.

"I can't wait to get stuck in," said Raducanu, the first qualifier in history to reach a grand slam final. "I think we're just going to go out there and have fun," said Fernandez, vanquisher of US Open champions past over the course of the last two weeks.

Those questions were preceded by a commemoration of an event that occurred in New York 20 years ago to the day, the players waiting in the tunnel as tributes were paid to the lives lost on September 11, 2001, when the towers fell and the world changed.

Neither Fernandez nor Raducanu were born. Indeed, the latter does not turn 19 until November, and her opponent celebrated her 19th on Monday, a day before beating Elina Svitolina in the quarter-finals. 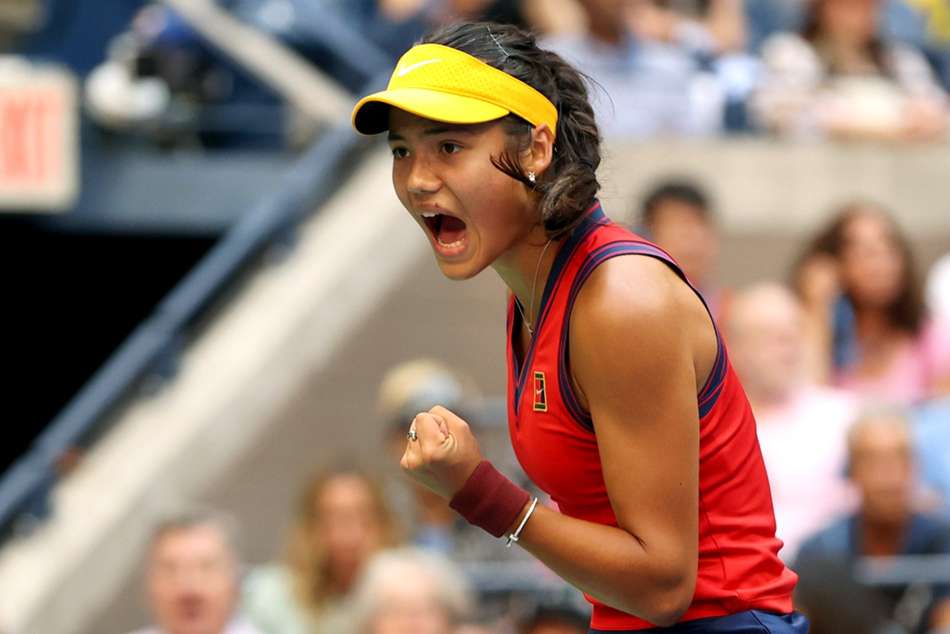 US Open: Qualifier Raducanu makes history after powering past Fernandez in pulsating final

Whether down to youthful exuberance, or the fearlessness that inexperience can bring, both players – who last met in the second round of the juniors at Wimbledon in 2018 – lived up to their promises in the pre-match interviews, to the benefit of an audience that can only have been glued to whatever screen they watched on, not to mention the 23,000-strong crowd in attendance at Flushing Meadows.

It was a final that could have gone either way, yet ultimately in the moments it really mattered most, it was Raducanu who came out on top, a 6-4 6-3 victory sealing one of the most unlikely successes of all time.

The tone was set immediately in the first women's slam final between two unseeded players. Raducanu applying pressure and breaking serve to edge ahead.

But Fernandez has had to battle back against the odds throughout her incredible run, beating defending champion Naomi Osaka, former world number one Angelique Kerber and current number two Aryna Sabalenka. The scores were level two games later.

Raducanu had not dropped a set throughout her run, but at 30-0 down in the fifth game, it appeared to be swinging in Fernandez's favour. Four straight points from the Briton ensured that was not the case.

Special tennis was on show. Quality, control and poise worthy of players way beyond their years. After an hour, something had to give, and it was Raducanu who, at the fourth time of asking, broke serve to seal the set.

What did Fernandez have left? Was this the beginning of the end for the youngest player to beat more than one top-five opponent at the same slam since Serena Williams saw off Monica Seles, Lindsay Devenport and Martina Hingis in 1999?

Yet Raducanu found herself 2-1 and a break down three games into set two.

Fernandez could not capitalise and Raducanu returned from an 82 mile-an-hour serve to get back on the front foot. An exquisite forehand winner saw her break for 4-2.

Raducanu's Wimbledon came to an end in tears at the fourth-round stage. When she moved to within a game of grand slam immortality, there was hardly a flicker of emotion.

Fernandez said she was out to have fun, though, and a smile was back on her face as two championship points went begging for Raducanu, who then skidded across the baseline, cutting open her knee in the process.

A medical time out was required and Fernandez's joy turned to frustration. It might have been crucial, Raducanu saving two break points before an outstanding ace secured her place in history.

Emma Raducanu's dominant #USOpen performance reminds us of a certain someone... pic.twitter.com/3C4Zb8UmYF

Ten matches, no sets dropped – Williams was the last player, in 2014, to win the US Open without dropping a set. Raducanu is also now the first woman to win a title so early in her slam career, in just her second major appearance.

Nine years and one day since Andy Murray won his first major on the same court, a new British hero emerged.

Virginia Wade, the last British woman to reach the Flushing Meadows final in the Open Era and the 1968 champion, watched on as the iconic Billie Jean King handed the trophy over to a superstar in the making.

Big names were absent from Flushing Meadows this year, but Raducanu and Fernandez served up a final, and a result, for the ages.