Bengaluru, July 7: Tunisia's Ons Jabeur entered her maiden Grand Slam final after beating Germany's Tatjana Maria 6-2, 3-6, 6-1 at the Centre Court in the semifinals of the Wimbledon 2022.

In the process, Jabeur became the first Arab and North African woman tennis player to reach a Grand Slam final.

In the final on Saturday, the 27-year-old will take on the winner Elena Rybakina who beat Simona Halep 6-3, 6-3 in the other last-four encounter.

In a SW19 thrill ride, second-seeded Jabeur came through in match between best friends on the WTA Tour. 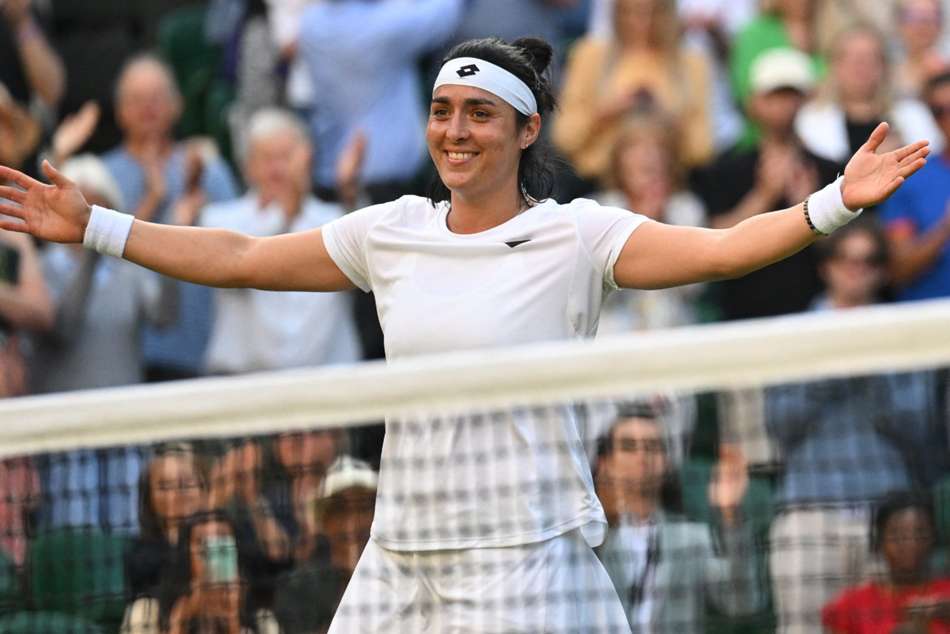 Jabeur had said ahead of Thursday's match that she and world number 103 Maria are "barbecue buddies".

Jabeur is close to Maria and the German's two young daughters, but it had to be all about business in the biggest match of each player's life.

This stage of a major was new territory for both players, with 34-year-old Maria the oldest first-time women's singles Grand Slam semi-finalist in the Open Era, which began in 1968.

Jabeur broke in Maria's second service game of the opening set and looked comfortable as she swept through that opener.

But there was a gear change early in the next set, Jabeur finding it more difficult to handle the slices and unconventional approach of Maria, who broke to lead 3-1 and was beginning to believe.

When Jabeur sent an unusually loose drop shot into the net, the match was level, yet the Tunisian picked up her performance when it mattered, breaking in the second game of the decider and then once more as Maria's challenge faded.

The German had been bidding to become the first unseeded women's singles finalist at Wimbledon since tennis fully opened up to professionals in 54 years ago. Maria upset big-name seeds Jelena Ostapenko and Maria Sakkari in earlier rounds, but her glorious run in London - the first mother-of-two to reach the last four since Margaret Court in 1975 - had reached its end point.

There has been an African singles Grand Slam winner, but not yet on the women's side.

Johan Kriek triumphed in men's singles at the 1981 Australian Open while representing South Africa. He defended that title a year later, by which stage he had switched nationality to compete for the United States. Opportunity knocks for Jabeur on Saturday.

For the past four years, Jabeur has been setting records for her country and region;. Now, having won 22 of her past 24 matches, the Tunisian ace has given herself the opportunity to go for the biggest milestone of all.

Before Jabeur, the only Tunisian to reach the Top 100 of the WTA rankings was Selima Sfar, who peaked at No. 75 in July 2001.

Jabeur's growth on the Tour has been steady. She became the first player from her country to reach a WTA final at Moscow 2018; to make a Grand Slam quarterfinal at the 2020 Australian Open, and to crack the Top 50 a month later; to win a WTA title at Birmingham 2021, paving the way for a Top 10 debut in October last year.