Bengaluru, October 31: King Fahd International Stadium in Riyadh, Saudi Arabia is all set to host the fourth global WWE show in their country. The card is stacked despite the company breaking the usual norm of putting up matches featuring so-called legendary names.

Mainstream sportsmen like Tyson Fury and Cain Velasquez will be the marquee performers instead of them. 5 Dimes online betting website has released the odds for the scheduled matches for these two prime performers.

Brock Lesnar (230) has been able to retain the winner's spot against Cain Velasquez (+170) ever since the match has been announced. Surprisingly, the other mainstream name Tyson Fury is not the favorite with +350 odds against Braun Strowman (-530). This means Fury's status as the undefeated boxer could be in jeopardy at Crown Jewel against the Monster among Men.

Apart from the main event matches, there would be some other big-time matches at Crown Jewel, like the tag team turmoil which is billed as the biggest in the history of the company. The winner will get the crown of the 'Best Tag Team' of the world. Below are the teams who will compete in the match,

Fightful.com revealed a spoiler on the match stating that the current plan is to make Erik and Ivar that is the Viking Raiders to pick up the win and get a surname of the Best Tag Team in the world. 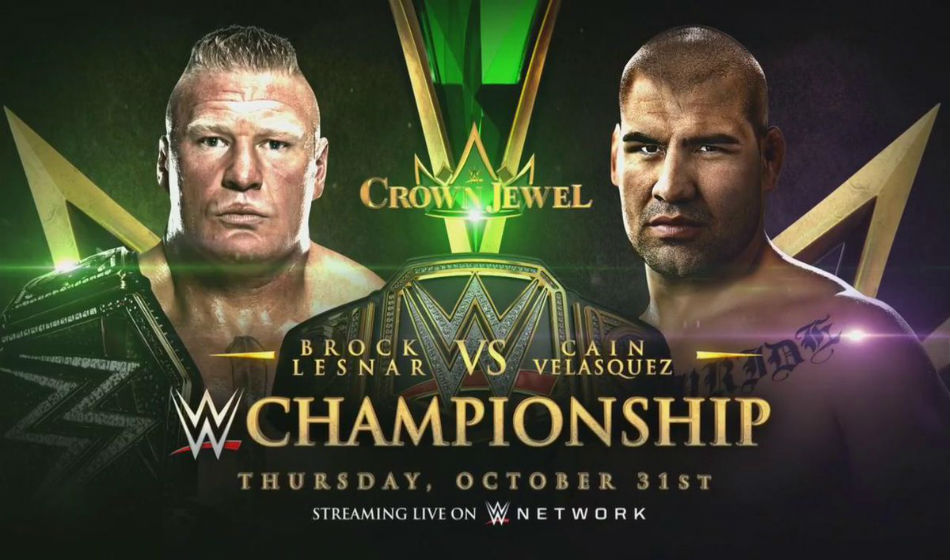 According to the report, the future-plan is to “stack accolades” on the Viking Raiders to build them up as a force in the tag team division:

“As of early this week, the plan was for the Viking Raiders to win the tag gauntlet at Crown Jewel to 'stack accolades’ for them. We haven’t heard any updates on the plans for that match since then.” (courtesy wretleTalk.com)

Meanwhile, WWE could add a major swerve around this matchup. As pointed out by Twitter user @OGhalayini (via @HeelByNatureYT), Shane McMahon was spotted arriving in Riyadh alongside his father, Vince McMahon and the other WWE officials. He was the one to insert himself into last year's Crown Jewel World Cup final and defeating Dolph Ziggler to claim the trophy and title of 'Best in the World.'

This is why speculations are going in that Shane could inject himself in this match with a mystery partner (probably Elias) and end up winning the match to keep his accolade from last year, intact. However, currently, it’s wild speculation considering that Shane McMahon was seemingly written off SmackDown after losing to Kevin Owens on the blue brand's premiere on FOX on 4th October.