Bengaluru, November 25: Moving on from the final big-four pay-per-view, WWE will start building up to the next one in line which also concludes the 2019 schedule from tonight on Monday Night Raw.

The TLC (Tables, Ladder and Chairs) which is one of the most popular gimmick-based events in the history of the company returns this December. And it will be interesting to see which all superstars get booked in marquee matches from WWE Raw to get an opportunity to start 2020 with a bang.

Currently, the speculation is that Brock Lesnar will feature for his next title defense at WWE TLC next month. But he may not be in the main-event spotlight once again as there will be a repeat of Survivor Series where women headlined the show. 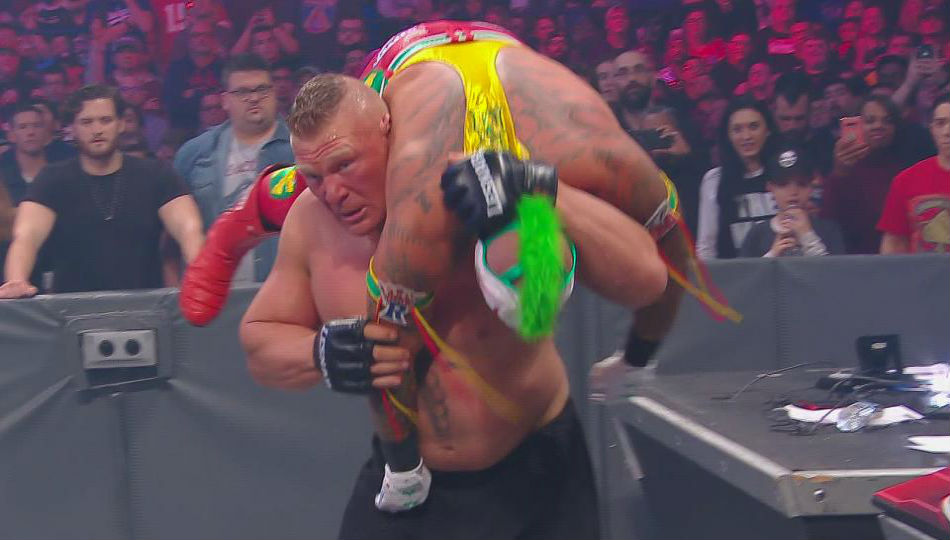 This time around, the women’s tag team titles would be the main object of attention. Also, we expect an official announcement for a Grudge Match from a personal rivalry tonight when one of the biggest weekends of the year concludes via WWE Raw from the All-State Arena in Chicago, Illinois.

Brock Lesnar had a successful championship defense at the Survivor Series PPV after he very easily overcame the resistance thrown by both Rey Mysterio and his son Dominick. A devastating F-5 helped the champion retain the title and is expected to go into a hiatus until Royal Rumble. But that may not be the case as TLC takes place in his hometown of Minneapolis, Minnesota.

Previously, rumours on the internet suggested that Brock Lesnar is set to defend his title for the third consecutive PPV of 2019 against Rey Mysterio in a stipulated environment. A Chairs match is expected to happen between these two and that will continue their championship feud from tonight onwards. Mysterio and Lesnar had an entertaining outing at Survivor Series. Hence, the audience won’t be having a problem with a rematch for sure.

In the women’s championship match, Becky Lynch stood tall to end Survivor Series PPV by beating down Shayna Baszler. She did not digest the pinfall loss and certainly did not lose the streak status despite Baszler picking up the win. Now Becky should move forward to defend her title against a superstar of WWE Raw roster. But at this point, the creative team may not want to book her in a title feud.

The Target Center in Minneapolis which will host the TLC PPV has advertised an interesting main event. It hints that the current Women's Tag Team Champions Asuka & Kairi Sane will compete against Becky Lynch and Charlotte Flair with the tag titles on the line. Plus, this will be the first-ever women’s TLC tag team match. So, the unlikely alliance of Flair and Becky will continue on WWE Raw.

Last week, Rusev could not attend Raw as Lana had him restrained. It was a short stoppage in the feud between Rusev and Bobby Lashley as WWE wanted to focus on Survivor Series. Now that the PPV is over, The Bulgarian Brute should be back on the show to seek redemption against The Dominator who has enjoyed a lot of make-out sessions with Lana. So, a set up for the much-anticipated Rusev vs. Lashley encounter at TLC is expected to be confirmed on WWE Raw.

Enjoy it, Roddy. You know where I’ll be every Monday night. #WWERaw #SurvivorSeries https://t.co/NxyFQqjGKR

Also, the United States Champion AJ Styles should get a new opponent for his title and so do the Raw tag team champions, the Viking Raiders. All of them have been involved in trying to bring advantage to the flagship show at Survivor Series. Now that they have come up short in getting the job done, it’s time to focus on their respective title reigns.