Bengaluru, August 19: The summer’s biggest spectacle for the pro-wrestling fans is just merely a few hours away as WWE is all set to present the 34th edition of SummerSlam, this weekend.

The show has shaped up to be no less than Wrestlemania-caliber as the two franchise players of the company are booked to battle in the main event match of the night for the Universal Championship.

Legendary Goldberg is also back on the scene to challenge for the WWE Title against the dominant champion from Monday Night Raw. 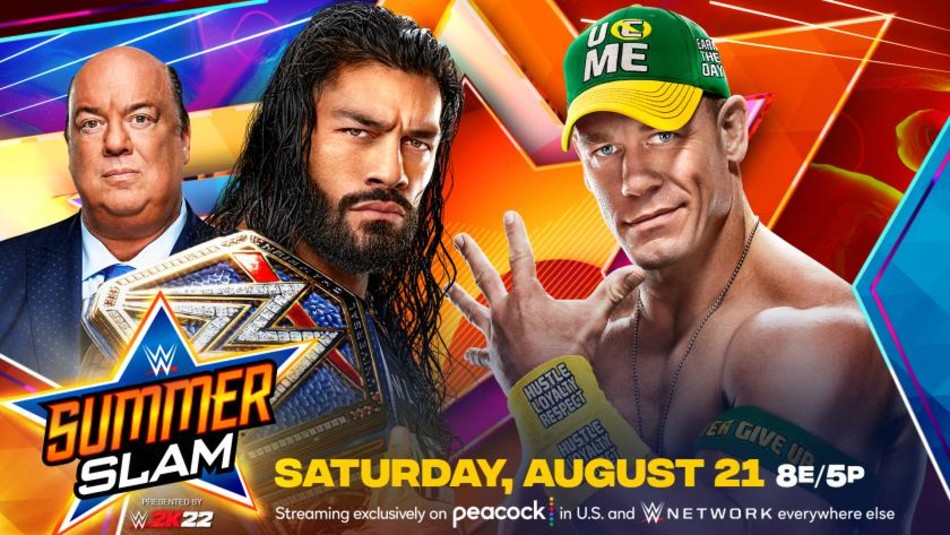 A dream match will also be there on the card when Hall of Famer Edge locks horns against his successor in the WWE, Seth Rollins. Additionally, there will be a much-anticipated Wrestlemania rematch between Sasha Banks and Bianca Belair.

Overall, seven championships from Raw and Smackdown will be defended at SummerSlam 2021, scheduled from the Allegiant Stadium in Las Vegas, Nevada.

Check out the full match card of the night alongside predictions:

Sheamus has been enjoying a controversial reign with the United States title where he unleashed attacks on his opponents before, during, and after his title defends. After suffering a broken nose, he showed resiliency by returning to the ring, as quickly as possible with a face shield.

The unleashed Celtic Warrior's momentums were only hurled after Damian Priest pinned him, clean in a Championship Contender Match, and then ripped off the face shield of the titleholder.

Prediction - Given the style of the two competitors, Sheamus and Priest will bring us a full-on physical battle at SummerSlam with the US Title hanging in the balance. The storyline has been a decent one where the challenger has been able to shift the momentums toward himself with a couple of wins. Hence, he can surely expect to win his maiden championship on the main roster.

The family warfare will be in full-showcase at SummerSlam for The Usos and The Mysterios as the tag team duos will engage in a rematch from Money in the Bank 2021. The championships changed hands at the bygone PPV when The Usos cheated their way to their seventh tag team title reign.

The Mysterios certainly bounced back in a big way with a couple of non-title wins, the following weeks. As Rey guides his son to superstardom in WWE, they will get one more opportunity to the tag titles.

Prediction - Rey and Dominik Mysterio should get one more chance to shine bright with golds around their waist but that may not be happening given The Bloodline is in full control on Smackdown and WWE wants them to be clad with belts, for the time being.

With Randy Orton's much-anticipated return to the WWE programming, Team RK-Bro is back as a band and they have their sights set on Raw Tag Team Champions AJ Styles and Omos, this Saturday at SummerSlam.

Styles and his "Personal Colossus" Omos have enjoyed a dominant reign on Raw since winning the titles from The New Day at WrestleMania 37. Just when they thought of being unstoppable, Orton and Riddle appeared as an unexpected tandem to throw a tough challenge to them.

Prediction - It takes only one RKO (the most dangerous three words in the history of sports entertainment) to make the difference and we guess AJ is about to be victimized by it to drop the tag belts. This way, Omos won't lose his undefeated streak (his loss against Orton occurred via DQ, this past Monday).

The Twisted Goddess of the WWE will go one-on-one with Eva Marie at SummerSlam with Doudrop standing in the latter's corner. The storyline for this match played out nicely on Raw over the past few weeks that also involved the supernatural doll named Lilly. We believe that she will play an important role in the match outcome while Doudrop might just also turn on her protégé due to a couple of slaps from this past Monday Night.

Prediction - Alexa Bliss will successfully transform Eva-lution into Lilly-lution, this Saturday night to possibly make her entry to the Raw Women's Title picture after a long time.

The Modern-Day Maharaja has set his sights on his former 3MB partner ever since his return to Raw since he knows a win over the top superstar can put him back to the title picture.

Mahal is smart enough to have Veer & Shanky by his side who ruined Drew McIntyre's attempt to win the 2021 WWE Money in the Bank ladder match. But McIntyre secured a Handicap Match win on Raw and assured that Mahal's goons remain barred from ringside at Summerslam.

Prediction - We expect some quality in-ring chemistry when the two gladiators bring their long history inside the squared circle. McIntyre is a slight favorite, heading into the match with Veer & Shanky not appearing in the match. In case, Mahal steals the win then a rematch is expected, next month at Extreme Rules.

This was a predicted booking for SummerSlam as soon as Nikki A.S.H cashed-in her MITB briefcase on Charlotte Flair to become the new champion, the night after MITB 2021. Now, the champ faces her toughest challenge as she enters a Triple Threat against two rivals, at the same time.

While Nikki proved herself as a strong champion by pinning Flair, a couple of weeks ago, she also digested pin-fall losses to both Flair and Ripley, which appears to be a negative stat for her title reign.

Prediction - Charlotte Flair has never lost a match at SummerSlam and it won't be a surprise if she clinches another title win at the upcoming PPV event. However, if WWE creative does want to extend the existing title reign then Nikki might just pin Ripley to retain and move on to her next feud against Alexa Bliss.

WWE put Sasha Banks and Bianca Belair on the main event of WrestleMania 37 Night One which appeared to be a huge success. The two undoubtedly delivered benchmark performances as the fans anticipated the second bout for the past few months.

Banks vs. Belair part II is scheduled for SummerSlam with a changed dynamic since the challenger turned heel upon her return to the WWE and vowed to steal the spotlight from Belair at any cost. On the other hand, Belair is focused on beating another member of WWE's Four-HorseWomen to cement her legacy.

Prediction - As you can predict, the SmackDown Women's Title match has show-stealing elements written all over it and we assume the bout will stick the WWE Universe glued to their TV screen. Sasha Banks as a heel is way better than a babyface and thus she might steal a win by bringing mean antics into the match.

An intense showdown is expected at SummerSlam 2021 when The Rated R Superstar goes to war against The Architect in a 'fantasy warfare become reality' kind matchup. WWE is billing this match as 'seven years in the making' which is just another hint of how deep and personal this rivalry goes between the two Superstars. Both men cost each other title match opportunities and went physical in the past few weeks, keeping the upcoming contest in a 50-50 state.

Prediction - Given that Edge is literally wrestling in borrowed time following his triple neck fusion surgery, WWE is using the veteran to put over the top superstars of the current generation. From that view, Rollins should emerge victorious following this Spear vs. Stomp encounter.

Bobby Lashley reached the top of his game at Money in the Bank as he put away Kofi Kingston within just a few minutes in a squash match. Just when it looked that no one from the red brand is able to beat the All-Mighty for his title, out came the legendary Goldberg to set up a colossal showdown that one could have only imagined.

The former WCW Legend has already shown intensity in his eyes to capture the first WWE Title of his wrestling career and en route, he put down both Lashley and his manager MVP with earth-shattering Spears.

Prediction - Heading into this match, Goldberg is an unprecedented favorite given his win-loss record in title matches. However, these days he only wrestles a couple of times and his match-quota for 2021 is also up at SummerSlam. So Lashley's title reign isn't likely ending at the hands of Goldberg.

Two of the most popular and polarizing Superstars from WWE's history will meet in the ring in SummerSlam main-event that should be talked about for ages. Roman Reigns is on top of his game as he overcame names like Edge, Kevin Owens, Rey Mysterio, Cesaro, and almost everybody else from SmackDown to solidify himself as one of the most dominant title-holders of the modern era.

On the other hand, if anybody can stop him, it's undoubtedly the predecessor of Reigns John Cena who is just a win away from becoming a seventeen-time world champion in the sports-entertainment history.

Prediction - Roman Reigns is the Head of the Table who isn't likely to be beaten by a part-timer like Cena. The Peacemaker star will fly to the United Kingdom anyway after SummerSlam for filming purposes, ruling out the possibility of a title win. That being said, Cenation Leader will step into Reigns' "Island of Relevancy", only to be packed back to Hollywood.