Villarreal, August 12: A gritty Bengaluru FC side gave a very good account of themselves in a narrow 1-0 loss to Villarreal CF B in their third friendly game of the tour of Spain, at the Mini Estadi in Villarreal, on Saturday (August 11).

A first-half penalty from Xavier Quintilla (32') settled the tie in favour of the hosts with Cuadrat's men gaining valuable competitive action ahead of the AFC Cup Inter-Zone semifinal clash. 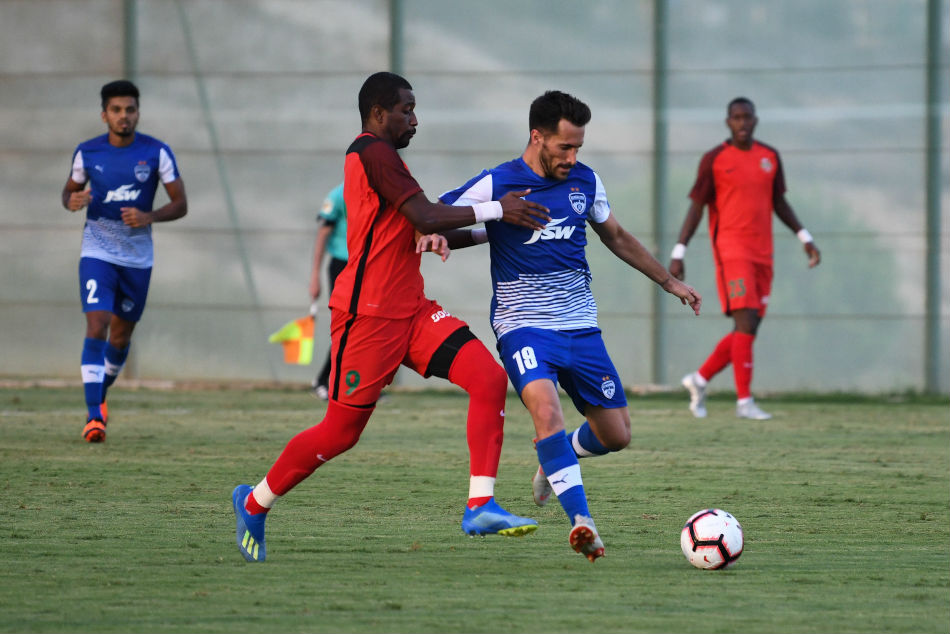 After a midfield battle in the opening minutes of the game, the Blues had back-to-back attempts. First it was skipper Sunil Chhetri who went inches over with his freekick from just outside the box, then it was Udanta Singh whose dangerous cut-back for Miku was cleared by a defender.

A minute past the half hour mark, the hosts pushed up and earned a penalty through Enric Franquesa who was brought down in the box by Rino Anto. Xavier Quintilla stepped up and sent the ball to Gurpreet's right. While the Bengaluru 'keeper, who was playing his first game of the tour after being laid low by chicken pox, guessed correctly, the take had too much on it.

It's ends 1-0 to Villarreal CF B in the Blues' penultimate friendly here in Spain as a spot-kick hands the hosts victory in a close fought encounter. #VILvBFC #BluesInSpain 🇪🇸🔵 pic.twitter.com/cK3HkiUUfD

The second half produced a much better performance from Bengaluru who created a lot of chances in the final third. Xisco Hernandez and Chhetri produced some quality moments but fell short with the final finish. Bengaluru's defence, steered by the ever-dependable Juanan Gonzalez, was compact and did extremely well to hold fort with Villarreal throwing bodies forward in an attempt to breach the last line of Bengaluru men.

Into the final moments of the game, the Blues had back-to-back chances to get an equalizer. First, the skipper controlled Gurpreet's long clearance and laid off a nice ball to Boithang Haokip who blasted it over from a good position in the 87th minute, before substitutes Semboi Haokip and Bidyananda Singh combined well to create space only for the latter's shot to be blocked away in the 90th minute.

The Blues next play FC Barcelona B in their final game in Spain on August 14.