Manchester, January 21: Jose Mourinho felt Manchester United should have killed off Burnley in the second half of their 1-0 win but was pleased with the performance his side produced.

Anthony Martial's second-half strike was enough to settle an encounter that was low on quality and clear-cut opportunities at Turf Moor.

David de Gea had little to do in the United goal but Burnley put the visiting defence under plenty of pressure in the second half, with Johann Berg Gudmundsson clipping the crossbar with a free-kick and Ashley Barnes coming close with a header.

Mourinho was happy with the way his side coped with the direct approach of their opponents but believes the game could have been over sooner had the likes of Paul Pogba and Jesse Lingard done better with counter-attacking opportunities. 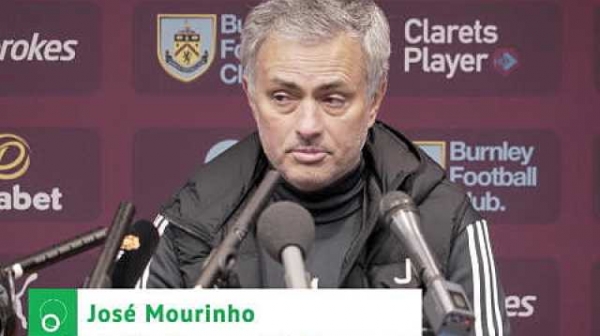 There's a lack of competition at Man United - Mourinho

"It's a different kind of performance than you try to have but it's the performance needed to get a result against a brave team like Burnley," the United boss told a news conference.

"We know the way they play, they are better than anyone playing that way, and you need to adapt to it to be successful. We adapted well from a defensive point of view.

"We should score a second goal and kill it and we didn't, and we put ourselves in a position where we had to fight until the last second.

"The best image of it is [goalkeeper Nick] Pope in the box for the last couple of crosses. That is the image of how competitive the game was."

Mourinho and Arsenal manager Arsene Wenger have both voiced their confidence that Alexis Sanchez's move to United will be concluded in the coming days, with Henrikh Mkhitaryan expected to move the other way.

Sanchez's arrival would give Mourinho another option in an already formidable attack, but he insists his squad does not contain the depth that some might think.

"In this moment, there is no competition for places," he said. "We have four attacking players for three positions, three are starting, one is on the bench, Zlatan [Ibrahimovic] for the whole season was not available.

"You look to central defenders, it was Jones and Smalling, [Marcos] Rojo was on the bench, Victor [Lindelof] in the stands, Eric Bailly is injured.

"You look to the attacking areas and we need that extra competition and more solutions for us."