Knocked out of the Champions League quarter-finals by Liverpool on Tuesday (April 10), City moved a step closer to domestic honours with a 3-1 triumph over Tottenham at Wembley.

City's dream of European glory was ended by Premier League rivals Liverpool but goals from Gabriel Jesus, Ilkay Gundogan and Raheem Sterling against Spurs put Guardiola's side on the cusp of a third league crown. 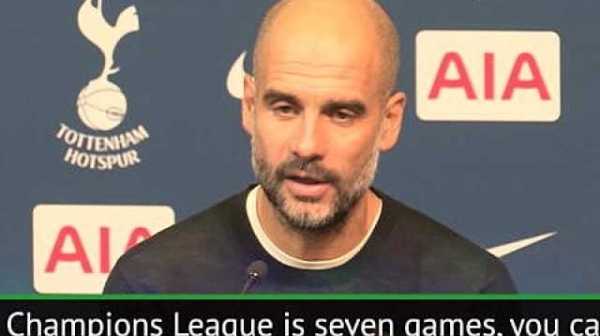 Guardiola and City will be crowned champions on Sunday (April 15) if neighbours Manchester United surprisingly slip up at home to rock-bottom West Brom and the Spanish boss talked up his team's exploits over the course of a gruelling Premier League campaign following their Champions League exit.

"If you have now 87 points, five games left, it's because we did outstanding when people said it was a big failure what happened last week," Guardiola said.

"They don't understand absolutely anything about football.

"I'm sorry but it's much more important what these guys have done the whole season."

City are 16 points clear atop the table ahead of United's clash with WBA at Old Trafford.