This week in La Liga: Sevilla climb to the top, Ansu Fati puts on a starry display & a special mascot

Bengaluru, Sept. 17: Another week of the Spanish League has gone by and its time to take a look at how the week unfolded. Sevilla have claimed the pole position this week after their win over Alaves. 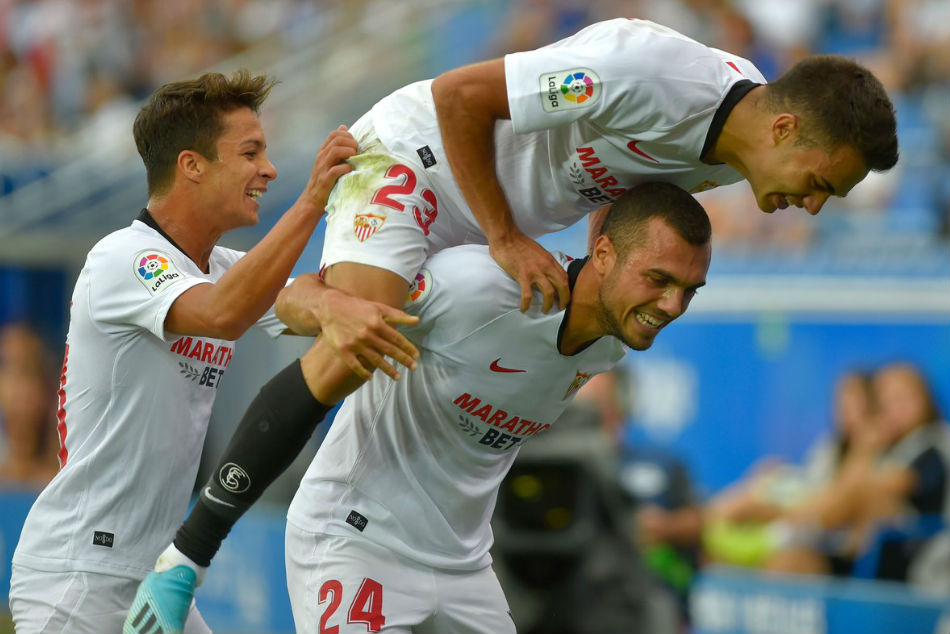 A lot more has been going on in the La Liga this past week and here we take a look at ten of the top stories, from a goalscoring return to a visit from a special mascot.

Sevilla go top of the table

Sevilla were able to win 1-0 in the Basque Country against Alavés, whereas Atlético Madrid fell to a 2-0 defeat during their trip north as Los Colchoneros visited Real Sociedad. This saw Sevilla overtake Atleti to move to the top of the 2019/20 LaLiga Santander standings, with 10 points from four matches.

Three clubs opened their doors to their fans for the first time this season, with Real Sociedad, Eibar and Real Valladolid having completed construction and redevelopment work at their grounds over the summer months. Supporters were able to enjoy these improved facilities this weekend and they'll do so for many years to come.

A special visitor at Leganés

Mr. Dillon, the mascot of the Portland Pickles baseball team, paid a visit to Leganés and to their Super Pepino mascot. The LaLiga Santander club are known as the Pepineros - the Cucumber Growers, in English - and they celebrated all things cucumber during this visit, while fans were able to meet both mascots before their match against Villarreal.

A night to remember for Ansu Fati

He's only 16 years of age, but Ansu Fati is already winning matches for Barcelona. The youngster scored a goal and assisted one too inside the first six minutes of their 5-2 victory over Valencia on Saturday night, making him the youngest player to finish a LaLiga match with at least one goal and one assist to his name.

Albert Celades takes over at Valencia

Marcelino was relieved of his duties as first-team coach at Valencia this past week and he has been replaced by Albert Celades, who has previously coached the youth sides of the Spanish national team and who has been an assistant coach for Spain's senior team and for Real Madrid.

Joaquín made his 400th Real Betis appearance on Sunday night against Getafe and he celebrated the milestone with a goal. The 38-year-old scored a penalty late on in the game to earn his side a 1-1 draw and a point.

Real Madrid summer signing Eden Hazard had been unable to make his competitive debut for his new club due to an injury he suffered on the eve of the 2019/20 season, but he has recovered from that issue and he has enjoyed his first minutes for Los Blancos. The Belgian came on for Real Madrid in the second half of their 3-2 victory over Levante at the Estadio Santiago Bernabéu on Saturday.

Pablo Hervías returns with a goal

After being out for half a year with a knee injury, Pablo Hervías played his first minutes since February in Real Valladolid's 1-1 draw with Osasuna. And he returned with a jaw-dropping long-range freekick that rippled the back of the net. Afterwards, the player revealed that the doctors had told him he'd end up on the scoresheet in the match.

Aritz Aduriz returned to Real Mallorca on Friday night with Athletic Club and, having spent two years with the island club, he was presented with a special shirt before the match given that this is the striker's final season before retirement. Aduriz came on in the second half and even had a chance to score what would surely have been a winner, but saw his penalty kick saved by Manolo Reina during a hard-fought 0-0 draw.

The group stages of the Champions League and Europa League get under way this week and seven Spanish sides will be in action. Real Madrid visit PSG, Barcelona travel to Borussia Dortmund, Valencia go to London to take on Chelsea and Atlético Madrid host Juventus in the Champions League.

In the Europa League, Sevilla play Qarabağ in Azerbaijan, while Getafe and Espanyol host Trabzonspor and Ferencváros respectively.