Washington, May 7: US President Donald Trump on Monday (May 6) bestowed Tiger Woods with the Presidential Medal of Freedom, the nation's highest civilian honour, describing the golfer as "one of the greatest athletes in the history of sports."

Woods, 43, is only the fourth and the youngest golfer ever to have received the highest American civilian award.

In his remarks, Trump praised Woods as "one of the greatest athletes in the history of sports."

Trump said, "we were in the presence of a true legend" who is "also a great person, a great guy".

"We can't wait to see what's next, Tiger," said Trump, an avid golfer and owner of several golf courses around the world.

It’s an incredible privilege to be awarded the Presidential Medal of Freedom. Considering the recipients, history, and what this means to me and my family, it’s also very humbling. Thank you all for your support and I hope this inspires others to never give up on their dreams. pic.twitter.com/33CJIHwQvz

Woods choked up as he thanked his mother, his two children, his girlfriend and his caddy during the ceremony on Monday (May 6) in the White House Rose Garden.

"You've seen the good and the bad, the highs and the lows, and I would not be in this position without all of your help," Woods said, who dominated the sport for more than a decade.

He won his first major in nearly 11 years at last month's Masters Tournament, a comeback that captivated the sporting world.

Woods's Masters victory was his 15th major championship, during which he weathered a marital infidelity scandal that ended in divorce, a debilitating spine injury, an addiction to prescription painkillers and grave doubts about his athletic longevity.

Trump has long been a fan and recently, a business partner of Woods. He announced his decision to give the award to Woods in a tweet, after Woods won the Masters tournament last month, his first major title since the 2008 US Open, capping a remarkable comeback from personal turmoil and physical injuries.

“Your spectacular achievements on the golf course, your triumph over physical adversity, and your relentless will to win, win, win. These qualities embody the American spirit of pushing boundaries, defying limits, and always striving for greatness.” — President Trump pic.twitter.com/sZv4w2Gk2X

The president seemed particularly impressed by what he called "record setting ratings" on television. He noted that Woods has now won 81 PGA tournaments and the second most majors. He also praised him as a "devoted philanthropist," noting, "That's how I first met Tiger."

He added, "We are inspired by everything you've become."

Woods was given standing ovation in the Rose Garden of the White House. According to ESPN, Woods is the 33rd sports figure and the fourth golfer to be honoured with the Presidential Medal of Freedom. 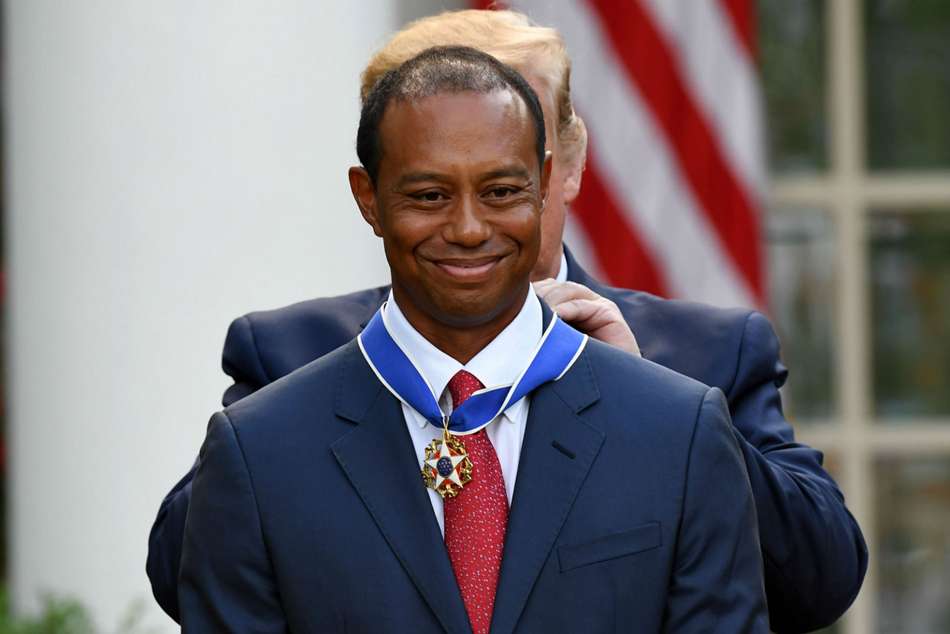 Sifford was the first African American to play on the PGA tour. Woods burst onto the professional golf scene in 1996 at age 20 and has won 15 Majors titles, second only to Nicklaus' 18 wins.

Presidents can award the medal of freedom to any person, living or dead, who has made "an especially meritorious contribution" to the security or national interest of the United States, world peace, or to a significant public or private endeavour.

In November 2018, President Trump awarded the Medal of Freedom to Roger Staubach, Miriam Adelson, Babe Ruth, and Elvis Presley, among others.