Rome, May 17: A furious Karolina Pliskova lost her cool as she exited the Internazionali d'Italia in controversial fashion on Wednesday (May 16), but there were no such problems for the world's top two - Simona Halep and Caroline Wozniacki. 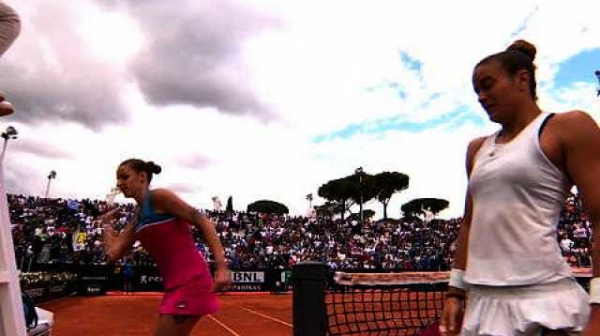 Pliskova smashes racket on umpire's chair after losing to Sakkari

Enraged by a line call that had gone against her at a key moment, Pliskova sensationally reacted to losing her match against Maria Sakkari by repeatedly striking the umpire's chair with her racquet, making a hole in the process.

The Czech had been left fuming when she put away an overhead at 5-5 40-40 in the third set, only for the ball to be incorrectly ruled out.

After a lengthy delay that saw Pliskova call for the tournament supervisor, Sakkari converted the subsequent break point before serving out the match.

In more sedate scenes on Wednesday, Halep and Wozniacki recorded respective straight-sets victories over Naomi Osaka and Alison Van Uytvanck. Halep needs to reach the last eight this week to be sure of holding on to the number-one ranking.

There were also wins for the likes of Venus Williams, Angelique Kerber, Maria Sharapova and Caroline Garcia, while Garbine Muguruza was stunned by Daria Gavrilova.

It remains to be seen what action will be taken against Pliskova, but the world number five's twin sister may also face punishment.

Kristyna Pliskova, who also plays on the WTA Tour, may find herself in hot water after using Twitter to lambast umpire Marta Mrozinska.

"The worst i have ever seen @wta and i hope this lady Marta Mrozinska will never ever judge any match of me or Karolina again #blacklistforever."

A champion in Indian Wells earlier this year, Osaka has recorded a number of notable wins in a breakthrough year on the WTA Tour.

However, the 20-year-old Japanese was comprehensively beaten on Wednesday as Halep reeled off 12 successive games to show why she is ranked number one.

.@Simona_Halep reels off six games in a row to take the opening set, 6-1! #ibi18 pic.twitter.com/OMKtGooPhb

"I just tried to build my points, to build a little bit of space and open the court, and tried to make winners," said Halep.

The Australian saved match points in the 12th game and tie-break before claiming a shock victory.