Federer confident of Australian Open defence with no plans to retire

London, December 29: Roger Federer remains confident in his ability to retain his Australian Open crown and says he has given no thought to retiring in the near future.

Now 36, the Swiss enjoyed a renaissance in 2017, ending a five-year grand slam drought by lifting the title at Melbourne Park with an epic five-set win over another veteran turning back the clock in Rafael Nadal.

Federer added an eighth Wimbledon title later in the year to make it 19 majors in total and he is targeting number 20 when the Australian Open rolls around in January.

Asked if he can prevail again in Melbourne, Federer told Tennis Australia: "Yes I think could. But again, it's a big question mark, it's seven matches away. I've got to stay healthy, can't get sick, you name it.

"There's so many components to winning a grand slam. I'm happy I've again put myself in contention; I seem healthy, I seem ready to go. 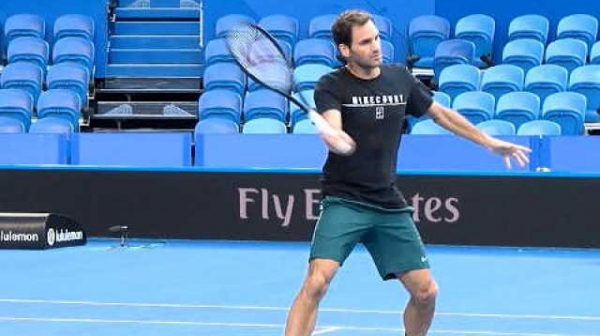 I can win Australian Open - Federer

"But again all the other players have a word to say and it's just hard to imagine I'll play as good as I did this year, because this season has been magical."

Great to be back in Perth,
See you tomorrow at 5pm
pic.twitter.com/YeLT1SJ8UK

Fourteen years on from his maiden grand slam success, Federer appears in fine physical shape and is not planning on stepping away from the sport any time soon.

"Not really, I mean I was asked a lot of questions again after winning Wimbledon, that would have been the perfect end really," he said.

"That would have been nice, but the idea last year after I got through the whole knee problems was actually to plan for the long term.

"So as long as I'm healthy and happy to play I'll keep doing that. So we'll see when the end is.

"I just think at this age now I have a lot of pleasure doing what I'm doing, because if I didn't enjoy what I was doing I would not do it anymore. I'm going to be very careful of selecting the tournaments I play.

"I think anything I win from here on forward will be like a massive bonus and kind of a surprise.

"Because I didn't expect myself ever to, at 36 or 37, to play as good as I am today. So it's really about staying healthy and enjoying myself."