WWE Money in the Bank 2019 match card with predictions

Bengaluru, May 19: The tenth installment of the Money in the Bank is here in a crucial time for WWE when the company is having nightmares of lower TV ratings.

Threats from All Elite Wrestling are also increasing day by day which is why a successful pay-per-view show is much-needed at this time. Plus, the Game of Thrones season finale is also listed on the same evening that makes the task difficult for the WWE.

Thankfully, the card for Money in the Bank is a loaded one compared to before and the card has all the prime championships on the line. The most favorite superstar of the roster, Becky Lynch will be pulling off double duties defending both the Raw and Smackdown women's championships. 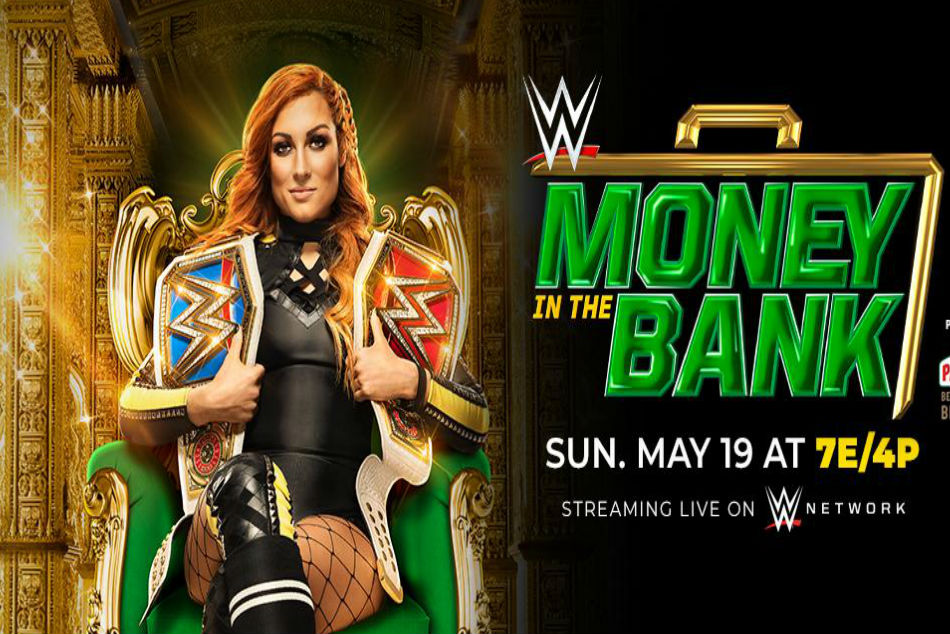 WWE Money in the Bank 2019: Preview and schedule

Plus, there will be a dream match for the Universal Championship which should keep the wrestling fraternity glued to their TV screen. Finally, there will be two Money in the Bank ladder matches that defines this gimmick based event.

Now, we try to break down the card predicting the winners from their respective matches in the show that takes place at the XL Center in Hartford, Connecticut.

It's odd to see Daniel Bryan land on the kickoff show after being part one of the main events at Wrestlemania. But as we have mentioned earlier, WWE wanted to load up the card right from the get-go. And this rematch from two weeks ago takes place in a non-title capacity just to ensure that The Usos can settle the score with the Smackdown tag champs by picking up the win.

Prediction: The Usos earn a clean pinfall win over the Bryan and Rowan

Becky 2 Belts is out on a mission to retain both the titles on the same night which may not be the case as Charlotte is standing in her way tonight. Her time as representative of both the brands should come to an end when Flair picks up her ninth title just to ensure that Becky stays on Raw and thereby put an end to the long term rivalry which started at 2018 Summerslam.

As mentioned above, Becky Lynch is permanently moving to Raw from Money in the Bank onwards. Hence, she will retain the red-strapped belt to run the women's division on the flagship show. Lacey Evans is Vince McMahon's current favorite as we head into the show but we think handing her the title in her very first title opportunity is not a smart idea. So, Becky should continue the title reign, for now.

Men's Money in the Bank Match

Andrade has always been the favorite to win 2019 Money in the Bank ladder match from men's division. But you never know, if WWE has a swerve in-store especially after this week's Raw. Sami Zayn replaced Braun Strowman which may be due to the reason that the creative has considered him to be the new winner. Strowman may appear to seek revenge against Zayn, Corbin and McIntyre which also makes Ricochet a potential contender for the win. So, anything is possible in this matchup.

Prediction: A wide-open match that has multiple contenders to win including Andrade, Zayn, Ricochet and Drew McIntyre

Women's Money in the Bank Match

With Alexa Bliss out of the mix, this match has lost the biggest attraction and the lacklustre buildup as well makes it a dull match on paper. Mandy Rose was the early favorite as she has been on a losing spree lately and a win at MITB will boost her character. Even the other names do not have any strong momentum at this point. But we still pick Bayley, due to her recent efforts after her move to Smackdown. Ember Moon also stands a chance considering the unpredictability factor around her.

Prediction: Bayley or Ember Moon should win 2019 women's Money in the Bank to start moving to Championship picture

Elias deserves a lot of credit for showing resiliency in a feud against none other than the franchise player of the company. He could try to come up with all the heel antics and backups available to pick up the biggest win of his career. But we still don't see him get past of Roman Reigns in his first pay-per-view match on Smackdown.

Prediction: Roman Reigns wins at Money in the Bank after a lot of shenanigans

We must say that WWE has not utilized these two to their full calibre when it comes to matches. For some reasons, they have been booked in short matches since Wrestlemania. Hopefully, Money in the Bank gives these two great in-ring workers enough time to produce a solid match which could swing in either direction considering the involvement of Mysterio's son Dominic into it.

Prediction: Dominic will decide the fate of this match by either helping his father Mysterio to win the US title or by spoiling the opportunity

This Wrestlemania feud has been carried forward for one reason only and that is to give the Miz a chance to settle the score. So McMahon may try to capitalize by hiring Lashley or B-Team as the goons, but we feel The Miz will find an equalizer in this No-DQ environment and thereby the victory.

Prediction: The Miz will win at Money in the Bank taking revenge on behalf of his father who was humiliated by McMahon during Wrestlemania season

Kevin Owens is a man poised for the prestigious championship on Smackdown. He will go to any low to win that gold for the first time. However, Kofi-Mania is still not over and needs more time to cement its legacy. So we don't see the champion, Kofi Kingston dropping the title this early.

Prediction: Kofi Kingston retains his title but the feud for the WWE title may continue

AJ Styles has never looked in better form since jumping ship to Raw during Superstar Shakeup. Now he gets Seth Rollins in his opposition that guarantees a match to be remembered for ages. When the dust settles, we still pick the champion to retain as he runs the Raw division and barely has had a successful defense before this. Letting him drop the belt, this quick, would ruin his strong status that WWE must not do at this point. So, the result is a no brainer.

Prediction: Seth Rollins to win this classic at Money in the Bank in a sure-shot future 'match of the year' candidate