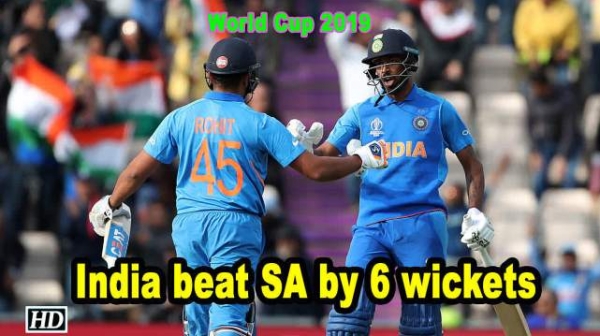 Southampton, June 5: It was not the prime Rohit Sharma who oozes elegance in tonnes on view against South Africa at Hampshire Bowl on Wednesday (June 5). It was Rohit Sharma of the grittier type helped India to a six-wicket win in their opening ICC World Cup 2019 match.

The 23rd ODI hundred of Rohit helped India overhaul South Africa's 227/9 with some degree of comfort. And Rohit did it without being in his grand self for a good part of the hundred. There were edges that nearly reached the slip cordon, beaten a few times by Kagiso Rabada, a catch was dropped on 111, but amidst all that clamour Rohit carried his bat with determination.

Rohit Sharma of this kind will certainly come handy for India as the tournament moves on and especially if his partner at the totem pole position Shikhar Dhawan does not find his range. After Dhawan edged Rabada to Quinton de Kock behind the wicket, Rohit in the company of Virat Kohli and KL Rahul (85 runs for the third wicket) and MS Dhoni (74 runs for the 4th wicket) steered India's boat to safer shores. And India would also like a few more runs from those two - Kohli and Rahul in the matches to come.

However, this is not to say that Rohit's knock was completely shorne off elegance. The pulled six of Rabada, a rasping square cut off the same bowler and a few late cut off Imran Tahir reminded that there is no prettier sight in cricket than Rohit in flow.

In fact, Rohit's presence in the middle overs helped India come out winners in the battle against Proteas spinners - Tahir and Tabrez Shamsi. Indians lost no wickets to spinners in the entire match while South Africa lost five wickets to Indian tweakers. That little skirmish played out in the middle had a massive impact on the game.

Earlier, Indian bowlers kept a leash on South African batsmen right from the word go and never really let it slacken at any stage. Of course, Chris Morris and Kagiso Rabada were involved in a more than run-a-ball 66-run partnership for the eighth wicket but it only helped South Africa extend their total a few yards past 200.

Before the Indian wrist spinners duo, now known by the more outlandish combo name of 'KulCha' took over the reins, Bumrah set the tone with a brilliant two-wicket spell upfront. He underlined the status as the best white ball bowler in the world with a marker pen on an overcast day at the Ageas Bowl. He generated pace and bounce to keep Quinton de Kock and Hashim Amla guessing always. Amla returned for this game but during his stuttering innings reminded us that his best days are far behind him.

Amla could not negotiate a pacy delivery - 143 kmph - that kept climbing on him and all he could manage was a tame edge to Rohit at second slip. Bumrah kept testing De Kock's patience outside the off-stump and finally the left-hander flashed away from body for Kohli to complete a very fine catch at third slip.

The wickets followed a phase when the South African middle-order and Indian bowlers engaged in a battle of wits. On a couple of occasions, they appeared building a partnership. Skipper Faf du Plessis and Rassie van der Dussen added 54 runs for the third wicket, David Miller and Andile Phehlukwayo milked 46 for the sixth wicket -- each alliance promising much more than their eventual stopping point.

122 runs and four #CWC19 wickets between this duo as India kick off their campaign with a win 🙌 pic.twitter.com/BFkrnr0ZH1

But on each those occasions, spinners Yuzvendra Chahal and Kuldeep Yadav, the former in particular, blunted the charge. Chahal was impressive - mixing up his deliveries and the dismissal of Du Plessis was superb. After tying the South African captain with a series of googlies, Chahal nailed him with a slider. The straight one breached Du Plessis' defence as the batsman remained stretched outside the crease. Just beautiful bowling!

Later, he came back for his second spell and removed David Miller, who got another one of those 30 without really converting it into something bigger. Chahal held on to a return catch as South Africa crumbled against spin in the middle over. The Morris-Rabada alliance gave some respectability to their total but never was sufficient to challenge India meaningfully.