Mbappe, back in the starting line-up after being an unused substitute in the 7-1 thrashing of Monaco on Sunday (April 15) that clinched the Ligue 1 title due to illness, completed his double in the 81st minute as the defending champions set up a final that will pit the mega-rich PSG against amateur third-tier side Les Herbiers. 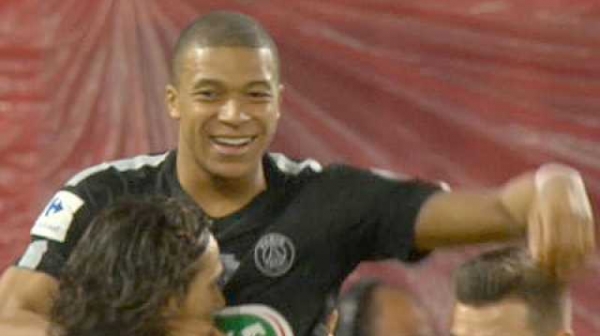 Caen finished the match with 10 men following Ismael Diomande's red card for a lunge on substitute Javier Pastore, and Christopher Nkunku, a stoppage-time replacement for Angel Di Maria, completed the scoring within two minutes of coming on.

Mbappe tucked Edinson Cavani's wayward shot home in the 25th minute to put PSG ahead, but Diomande, Caen's hero in their first ever run to the semis with crucial goals in the victories over Metz and Lyon, equalised before half-time – though a wicked deflection off Adrien Rabiot was required.

The match looked destined for extra time until Di Maria's backheel released Cavani to set up Mbappe once again, and Nkunku rounded off the win in the 95th minute.

Unai Emery's side consequently remain on course for an unprecedented fourth Coupe de France triumph in succession and third clean sweep of domestic trophies in four seasons, but it is unlikely to be sufficient to secure his long-term future in the capital.

PSG could have twice taken the lead in the opening 15 minutes, but Damien Da Silva made two important blocks to keep Cavani at bay.

However, a poor clearance from goalkeeper Brice Samba went straight to the opposition and the swift break that ensued ended with Mbappe steering Cavani's cross-cum-shot into an open net.

Caen were level in the 43rd minute, though. Diomande's shot took a wicked deflection off the leg of Rabiot and had enough power to get past the fingertips of Kevin Trapp in the bottom-left corner.

The hosts got a reprieve from the video assistant referee after Cavani volleyed home from Di Maria's looped pass in the 47th minute, with the Argentine deemed offside upon review.

Emery replaced Julian Draxler with Pastore in an attempt to bring some fresh ideas to his team, but it was Di Maria who proved the key to unlocking Caen's defence with a moment of magic that enabled Cavani to square for Mbappe to slot home nine minutes from time.

21 - Kylian Mbappé has scored 21 goals in all comps this season, only Antoine Griezmann has scored more (26) among the French players of the Top 5 European Leagues. Armada. pic.twitter.com/tUfSIQRuMR

Diomande was shown a straight red card for his clumsy tackle on Pastore in the 90th minute and Caen's misery was compounded in stoppage time.

Nkunku drove in from the left and played a one-two with Dani Alves, sent on for Cavani in the closing stages, before curling a fine finish past Samba, ensuring PSG still have something to play for this season.