Gelsenkirchen (Germany), April 19: Niko Kovac will face his future employers Bayern Munich in the DFB-Pokal final after Eintracht Frankfurt edged past Schalke 1-0 in a tense semi-final at the Veltins-Arena.

Kovac will take over the Bavarian giants at the end of the season but not before facing off against them in what will be his last game in charge of Frankfurt on May 19.

They will face an ominous task against Jupp Heynckes' side, who booked their place in the final with a crushing 6-2 win over Bayer Leverkusen on Tuesday (April 17).

A closely-fought game looked to be heading for extra-time when Luka Jovic met Jonathan de Guzman's corner in the 74th minute with an acrobatic back heel into the far corner of the net. 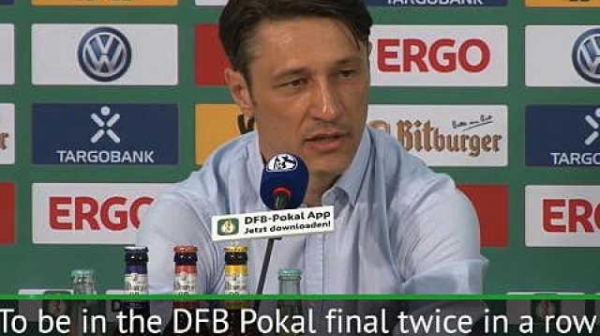 We deserve a nobel prize - Kovac

Until then Schalke had looked more likely to find a winner, with Guido Burgstaller and Yevhen Konoplyanka both denied by excellent saves from Lukas Hradecky.

And Franco Di Santo was controversially denied an equaliser for handball deep into injury time, referee Robert Hartmann opting not to employ VAR, as the visitors held on to set up an eye-catching final against the Bundesliga champions.

Did someone say Berlin?

Frankfurt did their best to silence the partisan home crowd early on, but Ralf Fahrmann got down well to thwart Jovic's whipped strike from Kevin Prince-Boateng's knock down.

Thilo Kehrer then headed over from a teasing free-kick for the hosts before they twice came close to breaking the deadlock just after the half-hour.

First, Daniel Caligiuri's low strike after a flowing attack was diverted just past his own post by the outstretched foot of captain David Abraham.

And from the resulting corner, Burgstaller's powerful header was acrobatically tipped over by Hradecky.

Any hopes the game would burst into life at the start of the second period were soon extinguished as it settled into its familiarly tepid pattern.

Marco Fabian tried to liven things up for the visitors, but his half-volley flashed comfortably over the crossbar.

Schalke then carved out two quick-fire chances but found Hradecky in inspired form.

The Finn got a strong palm to Burgstaller's clipped effort after a mazy run from Caligiuri and then repelled Konoplyanka's fierce drive from the middle of the penalty area.

The importance of those saves was highlighted 16 minutes from time as Jovic showed superb improvisation to divert an in-swinging corner past Fahrmann.

Kovac sent on Fernandes to shore things up in midfield, but the Portuguese received his marching orders soon after for a late challenge on Leon Goretzka, after the referee had consulted VAR.

Di Santo dramatically saw a goal ruled out with almost the last kick of the game after being deemed to have controlled the ball with his arm, as Frankfurt ultimately held on to set up a fairytale final for Kovac.