Leverkusen, April 18: A Thomas Muller-inspired Bayern Munich crushed Bayer Leverkusen 6-2 on Tuesday (April 17) to book their place in the DFB-Pokal final in emphatic fashion, as the Bundesliga champions' treble hopes remain on course. 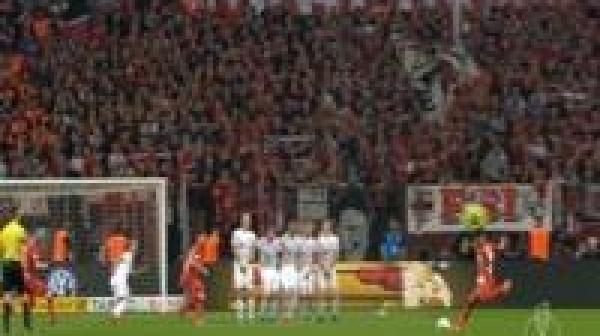 Bailey brilliance in vain for Bayer

Heiko Herrlich's men initially produced a good response to falling two goals down early on, but Bayern ultimately blew Leverkusen away, with Muller scoring a hat-trick in a remarkably comfortable win at the BayArena.

Leverkusen looked as if they were going to be on the end of a hiding after just nine minutes, as Bayern wasted little time in going 2-0 up.

Lewandowski got both goals after a rapid start, but the home side were given a way back into the contest shortly after – Lars Bender taking full advantage.

Any encouragement for Leverkusen was quickly snuffed out, however, as ruthless Bayern stepped up and brought the hammer down on their hosts, with Muller and Thiago Alcantara scoring within 15 minutes of the restart.

Muller got himself another in the 64th minute and, although Leon Bailey netted a stunning free-kick late on, things got uglier yet for Leverkusen as Bayern's captain completed his treble to book a final spot in ominous style.

Bayern looked every inch a side determined not to suffer semi-final disappointment for a second season in a row during the early stages, as they raced into a 2-0 lead.

Lewandowski put them in front after just three minutes, turning in from close range after Javi Martinez had shot in his direction.

The visitors got a second soon after – Lewandowski meeting Franck Ribery's chipped cross with a controlled volley that he tucked inside the left-hand post.

But out of nowhere Leverkusen got themselves a lifeline with 16 minutes played, as Bayern failed to clear a corner and Bender nodded past the static Sven Ulreich.

Leverkusen looked more threatening in attack for the remainder of the half and nearly levelled seven minutes before the break, but Ulreich produced a fine one-handed save down to his right to keep out Karim Bellarabi's thunderous half-volley.

The hosts were quick out of the blocks in the second half and caused panic in the Bayern defence early on – Kevin Volland crucially denied by a Mats Hummels block, before Bellarabi was again stopped by Ulreich.

And Bayern capitalised a few moments later, with Muller latching on to Thiago's throughball and slotting past Leno.

Thiago then got in on the act himself in the 61st minute, pouncing on a loose ball in the area and firing into the bottom-left corner shortly after Volland had a goal disallowed for offside at the other end.

Muller swiftly added a fifth, deflecting Arjen Robben's effort beyond Leno after the Dutchman had been picked out by half-time substitute Rafinha.

6-2 up, on comes @jamesdrodriguez. 🇨🇴

Bailey netted a glorious consolation in the 72nd minute, finding the goal with a 30-yard free-kick, but Bayern's captain was not done and he rounded off his hat-trick shortly after, bringing Thiago's brilliant long pass down before finishing under Leno from just inside the area.