Kho Kho: All round Maharashtra win boys and girls title at Junior Nationals in Surat

Surat, October 24: Defending Champion Maharashtra won the titles in both boys and girls finals as they put up a stealer show in the finals of the 39th Junior National Kho Kho Championships in Surat.

Maharashtra boys played a nerve-wracking match against arch-rivals Kolhapur as they clinched the title by a single point while the girls also took home the title with 2 points win over Karnataka.

The boys took 9 wickets in the first round while Kolhapur could only manage 7 at the end of the first innings. Displaying great game of Kho Kho throughout the tournament, Kolhapur tried to put up their ace game as they put 5 Maharashtra boys off the mat. 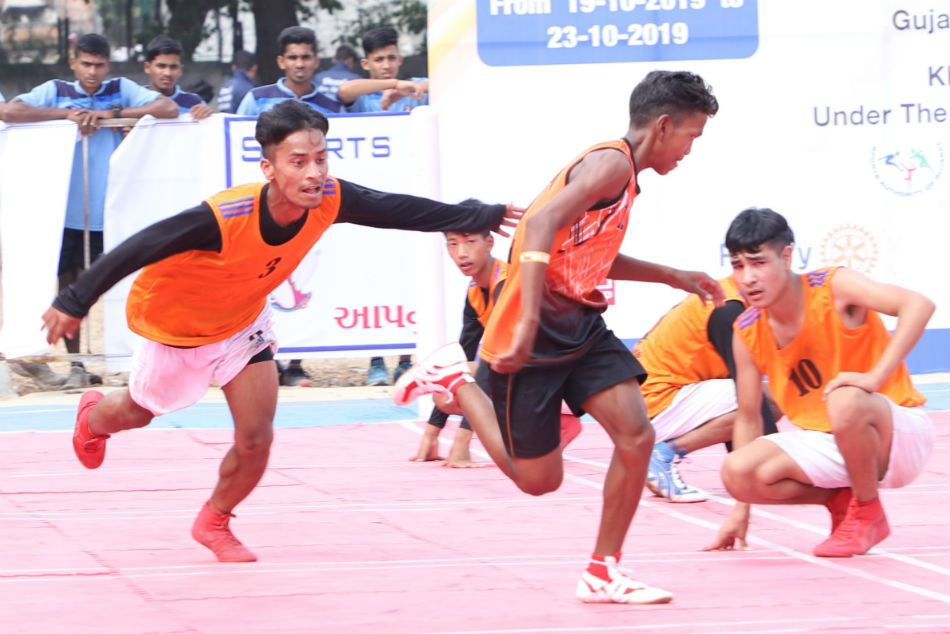 The 3-point-lead, however, was not enough to stop the defending champions from the glory as they pushed Kolhapur defenders to the edge with front fakes and dived spectacularly to lock 4 more wickets and won the title with a confident win and 3 and a half minutes to spare on the clock.

The girls also joined the celebration as they defeated Karnataka by 2 points in the finals. Chasing first the girls from Maharashtra booked 5 wickets in the first round itself while Karnataka had to settle for 3.

Both the teams acquired 4 more points in the second innings which helped Maharashtra to keep their 2 points lead intact at the end of the session.

Reshma Rathod, after her match-winning knock in the semi-finals, continued her unstoppable show in the finals too. She took 2 crucial wickets for Maharashtra in the second innings. On the defensive end, she shattered Karnatka's confidence by successfully defending for 5 minutes and 40 seconds in both the innings using an unpredictable combination of zig-zag and long run to dominate the strategies that the opponent had placed.

For boys, Dilip Khandavi was the star of the match as he took 2 wickets in each innings while being exceptionally brilliant on the defensive front too. Dilip defended for a total of 4 minutes in both the innings.

Dilip and his counterpart Janvi Pethe from the girls' team were adjudged as the best players of the tournament and were awarded the much acclaimed Veer Abhimanyu award and Janaki award respectively.

While Kolhapur and Karnataka had to settle for the silver in the boys' and the girls' categories respectively Andhra Pradesh and Delhi were the second runners-up at the Junior National Championships. Home team Gujarat maintained the 4th position in the girls' category.