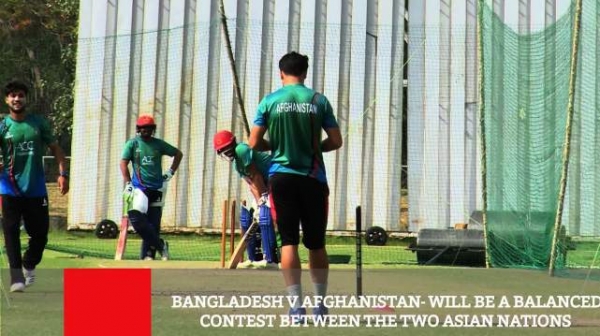 Southampton, June 23: Afghanistan will be out to strike a big blow to Bangladesh's semi-final hopes after almost pulling off a monumental Cricket World Cup shock against India.

Mohammed Shami took a final-over hat-trick at the Rose Bowl on Saturday (June 22) to give India a dramatic 11-run win after Mohammad Nabi's half-century gave Afghanistan a great chance of sensationally beating Virat Kohli's side.

A sixth defeat out of six dashed any semi-final hopes Afghanistan may have had, but they have three more chances to register a win.

Bangladesh are three points behind fourth-placed England and will see Monday's encounter in Southampton as a great opportunity to boost their bid for a top-four finish.

The Tigers have shown their quality with the bat, but the bowlers must step up after coming in for more treatment in a high-scoring defeat to Australia last time out.

Bangladesh won the only previous World Cup encounter between the two nations by 105 runs four years ago.

Bangladesh started with a superb victory over South Africa and also piled on the runs to defeat West Indies. They were narrowly beaten by New Zealand before going down to England and Australia, also having a game against Sri Lanka washed out.

That tense tussle with India is as close as Afghanistan have come to a win, having lost to Australia, Sri Lanka, New Zealand, South Africa and England.

Afghanistan captain Gulbadin Naib: "I think we're now getting better and better day by day. This is the team I wanted actually. Also in the batting side. So this is a good sign."

Tigers batsman Mohammad Mithun: "Everyone is expecting that we will win. Every match is the same in that we play to win. But I think we should be more careful in this game."

- This will be the eighth time that Bangladesh and Afghanistan will have faced off in an ODI, the Tigers winning four and losing three.

- Mahmudullah has made more runs in ODI matches between his country and Afghanistan than any other batsman; scoring 243 in six knocks.

- Shakib Al Hasan has more wickets in 50-over games between the two nations than any other bowler, claiming 13.

- All-rounder Shakib has averaged 106 from his five innings so far in the tournament.