London, April 27: A dejected Arsene Wenger felt a more clinical Arsenal might have already booked a place in the Europa League final after a frustrating 1-1 semi-final first leg draw against Atletico Madrid. 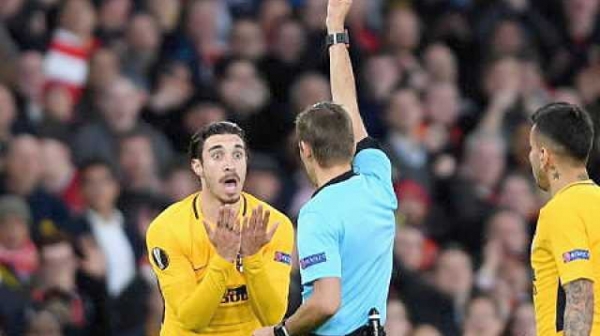 Atletico Madrid red card not an advantage for Arsenal - Wenger

The visitors were reduced to 10 men at Emirates Stadium as Sime Vrsaljko astonishingly collected two bookings inside the opening 10 minutes.

Alexandre Lacazette and Danny Welbeck both spurned chances to put Arsenal ahead before the break but the former made it seven goals in his past seven matches across all competitions with an expertly directed header from Jack Wilshere's 61st-minute cross.

However, Antoine Griezmann pounced on a slip from Laurent Koscielny to poach a vital away goal for Diego Simeone's side and end Wenger's final European home game at the helm on a sour note.

"Looking at the performance we had and the way the game went it was the worst possible result," he told BT Sport.

"We have to go there in a positive mood and qualify over there. We have to recover from a disappointment and prepare for the next one.

"It felt like an opportunity missed. We could already be qualified but it didn't happen. Their goalkeeper made many saves and you could see that they have the quality up front to take advantage

"We knew if we did not score the second one it was important we did not concede."

1 - Arsenal have lost just one of their eight semi-final first legs in European competition (W4 D3), while they’ve progressed from the tie on every previous occasion they’ve avoided a first leg defeat. Hope. pic.twitter.com/V95yHcKbHc

Atleti's defensive obduracy was on full display as they battled with reduced numbers and LaLiga's second-placed team have not conceded in any of the past 11 matches at the Wanda Metropolitano.

Nevertheless, Wenger is refusing to be daunted by the task awaiting his team next week.

"You don't look at the statistics, you look at your performance and we know we can score anywhere," he added.

"First recover, because the players have given a lot, and then see what we can do over there.

"We have to go there with absolute belief to do it."