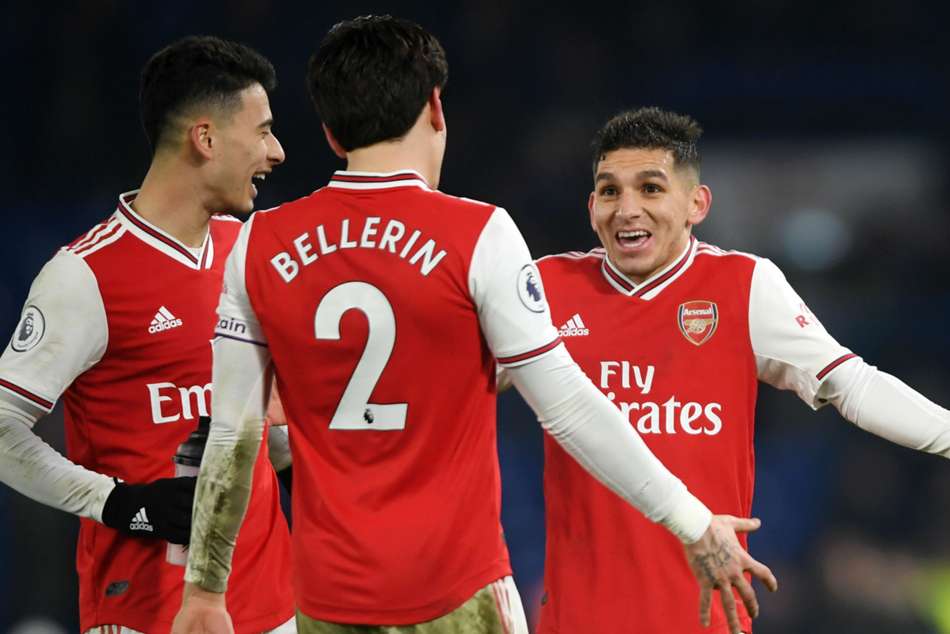 Jorginho opened the scoring from the penalty spot in the 28th minute after David Luiz was shown a red card for sending Tammy Abraham, who had pounced on a slack backpass from Shkodran Mustafi, to ground in the box.

Gabriel Martinelli sprinted from well inside his own half to score a classy counter-attacking goal after the hour mark, but Cesar Azpilicueta looked to have clinched all three points when he turned home Callum Hudson-Odoi's cross with six minutes remaining.

However, Hector Bellerin, making his first start in over six weeks, got the better of a hobbling Abraham and found the bottom-left corner in the 87th minute.

"I am disappointed given the situation of the game. We completely deserved to go 1-0 up. For a little bit after that we were getting used to them with 10 men," Lampard told BT Sport.

"We created enough in the second half, it was the same story for us that we don't finish our chances and we made errors to give them two goals on the break. It probably shows where we are at. These sort of things don't lie.

"We work hard but basic errors when you should control the game can end up losing you points.

"It's not the slip from N'Golo [Kante], that can happen, it's that they get away from the edge of our box. That's a moment sleeping, people should know their jobs.

"And then the last goal, so easy to cut back. It's the sort of goal you see over the park, a right-back that moves it slowly onto his left foot and rolls it in the far corner. That can't happen."

Mikel Arteta moved Granit Xhaka to centre-back after David Luiz's dismissal and believes the spirit his team showed can help them close a 10-point gap to Chelsea and challenge for the Champions League places.

"Time will tell [if it's a turning point], but at least I saw a reaction. I demand from the players that they never give up, the circumstances don't matter, we have to keep playing with the spirit we showed in every game," Arteta said.

"I'm so proud of the team and how they reacted, how they stepped up when a team-mate makes a mistake, someone gets sent off, and they have to have their back.

"We thought about taking everybody off because the energy was going down and every five minutes somebody was cramping, so we changed our mind a few times. But it's a good point in the end considering the circumstances of the game.

"We are hoping to fight to stay in the race for the Champions League until the end and if you want to do that you have to come here and to win and they way they did it was brilliant."