Abu Dhabi, February 05: Mumbai Falcons and Jehan Daruvala continued their winning spree with a 2nd consecutive victory in the Asian Formula 3 Championship. A thrilling battle kept fans on their toes as Jehan had to fight tooth and nail to win Race 2 and also completed a hat trick of podiums to finish second in Race 3 and move into the championship lead.

The Mumbai resident had a near perfect launch from pole position and held his position into the first corner. Behind him, Isack Hadjar of France also held onto second, while championship leader Guanyu Zhou dropped a position to allow Dino Beganovic into third.

The first few laps were uneventful and once the top few settled into a rhythm, Hadjar seemed to have more pace than Jehan. He soon started piling on the pressure, with numerous attempts which did not stick. Hadjar then had a good run out of the corkscrew section and came alongside Jehan. The two entered the corner side by side, but Jehan held on. 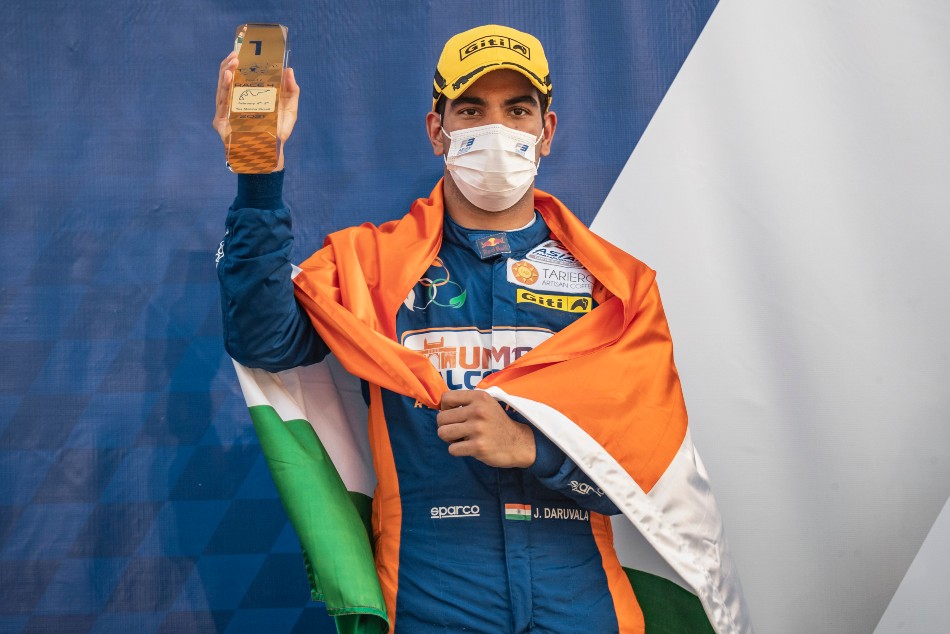 A few laps later a similar situation repeated, this time however, the duo went side by side for more than one corner. This allowed Beganovic in third, to also pull alongside Jehan.

In the run down to the braking zone, it was three cars wide with barely centimetres between the cars.

The Mumbai Falcons' racer in the middle of the sandwich, momentarily fell behind the duo. He was the bravest though, and braked last, allowing him to surge ahead. Jehan somehow managed to stay on track and held the lead.

Proceedings settled for a bit, before Hadjar made another attempt, but Jehan was able to fend that off in spite of Hadjar pulling ahead slightly. Jehan held off a final attempt on the last lap as well, and crossed the finish line to take his second consecutive victory. Hadjar and Beganovic were second and third respectively.

The grid for Race 3 of Round 2 was based on the second qualifying session yesterday. Pierre-Louis Chovet from France started on pole and straightaway went into the lead. Championship leader Guanyu Zhou was unable to get going initially and Jehan from third moved into second, with Hadjar third.

The championship format allows only 2 sets of tyres per round, to be used and Chovet was on a fresher set of tyres, while Jehan and Hadjar were on an older set, and therefore unable to challenge Chovet, who comfortably won the race. The Mumbai Falcons' racer was second, ahead of Hadjar.

"I was under a lot of pressure from behind, and was fighting hard to hold my position. Hadjar drove well and I really enjoyed the moment when we were three wide. It was an enjoyable battle and it is good that we were all able to race close and clean." said Jehan, the new championship leader.

"We were all on edge, watching the really close battle for the lead in race 2. Jehan drove superbly. We must continue working hard and hope we can build on this momentum we have now. We are really proud to have an Indian from an Indian team, lead the championship." said Moid Tungekar, CEO of Mumbai Falcons.

Racing action will resume tomorrow with Round 3 also in Abu Dhabi, on the same corkscrew layout of the Yas Marina Circuit. Fans can watch the races live on Mumbai Falcons Racing Limited YouTube Channel.