Monza (Italy), September 12: Lewis Hamilton has predicted an "easy win" for championship rival Max Verstappen in Sunday's Italian Grand Prix and is focused only on trying to "limit the damage" caused by his disappointing showing in the sprint race.

Mercedes driver Hamilton was made to pay for a poor launch in Saturday's half-hour 18-lap race as he slipped from second down to fifth, behind Lando Norris, Daniel Ricciardo, Verstappen and winner Valtteri Bottas.

With Verstappen starting from the back of the grid on Sunday (September 12) after taking a penalty for a power unit change, each driver moves up a place, meaning Hamilton will start in fourth and Verstappen in pole position.

Victory in the sprint race – just the second to have ever been staged after the inaugural event at Silverstone in July – also meant Red Bull's Verstappen extended his championship lead over Hamilton from three points to five.

And seven-time world champion Hamilton fears that gap could grow wider come the end of the main event in Italy, with the Briton's main aim being to finish ahead of McLaren pair Ricciardo and Norris in second place.

"We lost a lot of points," he told Sky Sports. "I've got to try and figure out how I can get by the McLarens tomorrow, and try to limit the damage.

"It's not the outcome we wanted and we can't afford days like these, especially when it is this close in the championship.

"You saw the pace of the Red Bull. I don't know if Max was quicker than Valtteri but they're so fast, and now he's on pole, so it should be an easy win for him." 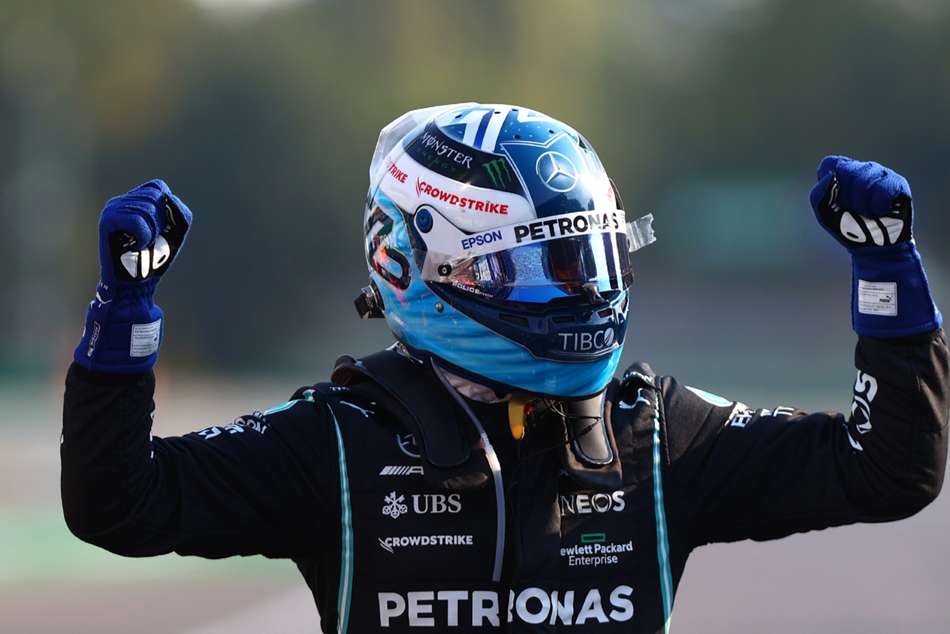 Verstappen was considered an outsider for the sprint but comfortably finished in second, though the Dutchman is taking nothing for granted heading into Sunday's race.

"I expected we would lose points on Saturday, but I have increased the lead a little," he told De Telegraaf. "Every little bit helps, of course. But it can also quickly turn around. I know all about that.

"I don't expect it to be a straightforward and easy race – Valtteri coming from the back, Lewis P4, they have a lot of pace, so we'll see what we can do against them."

Bottas' triumph came in the same week it was confirmed he will switch from Mercedes to Alfa Romeo next year, having been dropped in favour of George Russell.

The Finn also led the way in the traditional qualifying session on Friday and his sprint race victory never looked in doubt as he retained first place throughout.

With the elation of finishing first comes some disappointment for Bottas, however, as he always knew he would be starting the main event from the back of the grid due to Mercedes' decision to add a number of new power unit elements to his car.

"What can I say, it's been a perfect weekend so far and now I have a grid penalty," he said. "That happens, but it's good to see we have good speed from the car here, good pace, and I'll be fighting tomorrow, going as high as I can.

"For sure it's annoying. We've done good the last two days, with good performances and then you kind of reset completely for the day after and you start from the back.

"Those are things that are out of my hands, so I won't waste too much energy or be too negative about it because there's absolutely nothing I can do about it.

"The only thing I can do is try my best and go full gas tomorrow. At least I got a few points – every point counts for me personally and for us as a team."