Meanwhile, Fabio Quartararo (Petronas Yamaha SRT) had a forgettbale day, with the Frenchman crashing out twice and losing his overall lead at the 2020 FIM MotoGP World Championship. 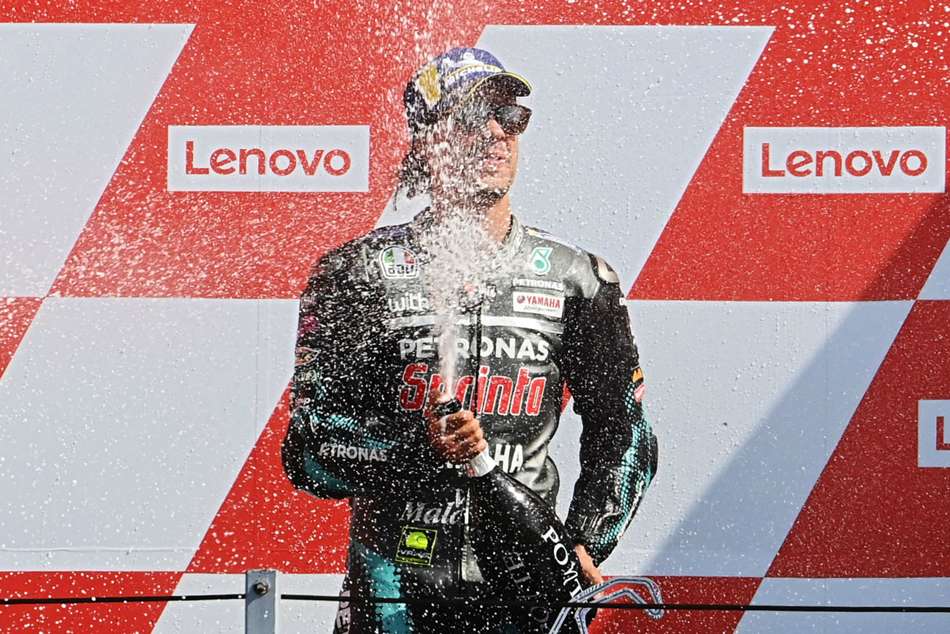 Morbidelli is the fourth maiden winner in six races as another little chunk of history made at Misano underlines the stunning unpredictable season so far.

The 2020 FIM MotoGP World Championship has taken another almighty twist. Quartararo's DNF is his first since the 2019 Australian GP and he loses the title lead for the first time in 2020.

Andrea Dovizioso now takes charge, but it is so close: 28 points separate the top 10 riders, with Bagnaia's second place seeing him 47 points off in P14.

From the middle of the front row, Morbidelli out-dragged both pole-sitter Maverick Vinales (Monster Energy Yamaha MotoGP) and Quartararo off the line and headed into Turn 1 leading.

Fourth place Rossi also got off to a superb start to slot into second ahead of the equally fast starting Jack Miller (Pramac Racing) from the second row. Vinales slipped to P4, with Quartararo slotting into P5 as Morbidelli and Rossi sent the Italian fans into raptures on the opening lap

Rossi got a good run down into Turn 8 on Lap 1 and showed a wheel to Morbidelli, but the latter was late on the brakes and closed the door.

The numbers 21 and 46 then started to create a bit of a gap to third place Miller, with Vinales holding off both Quartararo and the two Team Suzuki Ecstar machines of Alex Rins and Joan Mir.

Vinales was the only rider on the grid to select the hard Michelin rear tyre, and the lap record holder seemed to be taking his time to get it up to speed - with Quartararo looking impatient behind.

The riders then settled into their rhythm, with Miller hauling in the leading duo to sit a couple of tenths behind them and Vinales and co just over half a second back from the Australian

The Spaniard eventually found his rhythm at the end of the race on the hard rear tyre and was searing around, but it was far too late and he had to settle for a disappointing P6 as Morbidelli cantered hom in style

Most of the MotoGP field will be out for a test on Tuesday (September 15) and then the entire grid will be back again at Misano World Circuit Marco Simoncelli next weekend. Bring it on!