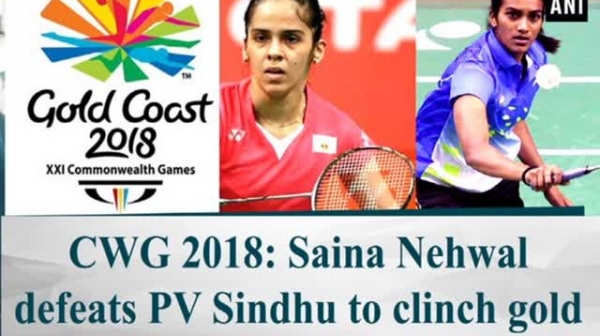 Saina, who led the head-to-head count 3-1 before Sunday’s match, won 21-18, 23-21 in the high-pressure match that lasted an hour. The triumph marked a remarkable end to her CWG campaign this edition. She was the pillar of India's gold-winning campaign in the team championship earlier, playing every one of the singles matches due to Sindhu's injury.

In a match that started on equal footing, Saina managed to dominate, bringing a rarely seen aggression to the court. The brute force of Sindhu's smashes was something that Saina found hard to deal with. On the other hand, Sindhu found it tough to adjust to the delicate placement of strokes of Saina, who took the pace off the shuttle by attacking the net. The strategy worked quite well for the London Olympics bronze-medallist and she raced to an 9-4 lead.

As the gap widened, Saina's command on the baseline also improved. The two contrasting styles of the two shuttlers made for an exhilarating contest. What also stood out was Saina's sharper instincts to leave the returns that landed out. Sindhu struggled to control the power she put on her shots, losing at least four points for pushing the shuttle outside and trailed 6-11 at the lemon break.

Fantastic final between @NSaina and @Pvsindhu1 showcasing their wondrous skills as well as intensity of rivalry. On this day, Saina mentally tougher, tactically sounder, and more ambitious to beat a much higher ranked . Gold medal thoroughly deserved. Well played!

Sindhu came back strongly after the break and narrowed the gap a bit but the drift-factor affected her strokeplay way more than Saina, who also seemed the more pumped up of the two, grunting quite a bit after every point won. Saina's court coverage was also the more impressive of the two.

A telling image of the opening game was when Sindhu was brought to her knees trying to return a smash that didn't really have any power in it but was just placed perfectly on the left corner. Sindhu found her bearings after Saina had taken a 20-14 lead and closed it 18-20 but Saina brought her own brute force to the fore with a smash targeting Sindhu's body which was simply unreturnable. Saina claimed the opening game 21-18 in 23 minutes.

The second game followed a similar tangent and despite having the more tired set of legs, Saina was a delight with her trademark angled smashes. But to Sindhu's credit, she too exhibited a better command on her smashes and improved considerably court-coverage to take a 9-7 lead, which she widened to 13-8 after the break. For the full house, mostly packed with the diaspora, it was a brilliant Sunday outing as the top two women of Indian badminton slugged it out, displaying an array of strokes. Sindhu led 19-16 at one stage but a 64-stroke rally to narrow it to 18-19 brought Saina right back and she equalised at 19-19.

However, Sindhu edged ahead for a 20-19 lead and a game point. The see-saw battle continued when Sindhu hit one out to give Saina the equalising point yet again. This time, it was Saina who got the championship point when Sindhu struck a return out. The lady, who looked the hungrier of the two all through, was surprisingly late in picking one up as Sindhu made it 21-21. But Saina was back in lead with a cross-court smash that Sindhu just could not reach. Serving for the gold, Saina forced a wide stroke from Sindhu and then let out a scream to celebrate the triumph.

Newly-crowned World No. 1 Kidambi Srikanth let slip the early advantage to settle for a silver medal in the 21st Commonwealth Games, going down to Malaysian legend Lee Chong Wei in the men's singles summit clash here on Sunday.

Srikanth had beaten Lee in the mixed team championships final earlier in the Games but the former world number one rallied for a 19-21, 21-14, 21-14 triumph on Sunday for his third individual CWG gold. He has two more mixed team gold medals to his credit.

A decade older than the Indian, Lee kept his best for the last, showing off the legendary reflexes that have earned him cult status in international badminton. But it was not all smooth sailing for him on Sunday as Srikanth started off confidently. It took Srikanth just eight minutes to go from being 0-4 down to be 10-7 ahead.

The Indian was the better of the two in executing drop shots and even managed to match Lee's ability to mix power with precision. Srikanth led 11-9 at the break. Srikanth remained a step ahead until 14-13 before a misdirected smash gave Lee the equalising point. But Lee was surprisingly off when it came to retrieving the shuttle and his usual agility on the court was only there in flashes.

To Srikanth's credit, he made the most of his fancied opponent's lack of intensity and took the first game 21-19 in the 25 minutes. A slight moment of drama came in the second game when it seemed Lee had struck the shuttle twice to claim a point but was not penalised for it and the match went on despite Srikanth's protest.

Lee's lackadaisical approach improved considerably thereafter and after leading 11-9 at the interval, he displayed some of the many stylish shots in his armoury to draw level and stay afloat in the high-intensity match, which was as much about elegance as sheer power.

Leading 9-5 in the decider, Lee went for a change of racquet and it only got him better results as he grabbed an 11-5 lead to take the psychological upper hand. The smashes that were landing outside in the opening game became just the bit accurate and difficult for the Indian to retrieve. Lee did show the tendency to take things for granted, exhibiting poor judgement in leaving a shuttle while leading 16-8. But even at his erratic worst, the Malaysian, who has multiple Olympic silver medals to his credit, was simply unstoppable for the Indian and claimed the match pretty comfortably.

Satwik Rankireddy and Chirag Shetty on Sunday claimed India's first ever medal in men's doubles after settling for a silver at the 21st Commonwealth Games' badminton competition here. Satwik and Chirag lost 13-21, 16-21 to Rio Olympics bronze medallist English pair of Marcus Ellis and Chris Langridge in a 39-minute men's doubles final at the Carrara Sports Arena.

With the silver clinched by Satwik and Chirag, India ended their highly successful badminton campaign with six medals, which include the mixed team event gold. At 17 and 20 respectively, Satwik and Chirag form a formidable pair. It was the Tata Open India International Challenge win that brought them into limelight in 2016.

They also won in Mauritius and Bangladesh, but their biggest win came last year when they clinched the Vietnam Open International Challenge. They had managed to topple former Olympic and world champion Markis Kido and his partner Hendra Gunawan en route the title. They also qualified for the Glasgow World Championship and managed to reach the quarterfinals at the Korea Open and the French Open. This year, Satwik and Chirag made it to the semifinals at Indonesia Masters and All England quarterfinals.