Adelaide, Dec 5: Gaining the respect of his country is as big a priority as taming India for Australian skipper Tim Paine, who Wednesday (December 5) said that winning matches and winning hearts are not mutually exclusive tasks for him.

Setting the tone for the four-match Test series that gets underway on Thursday (December 6), Paine said the Australian team, still recovering from the furore of the ball-tampering scandal, has identified the areas that needed some changes. 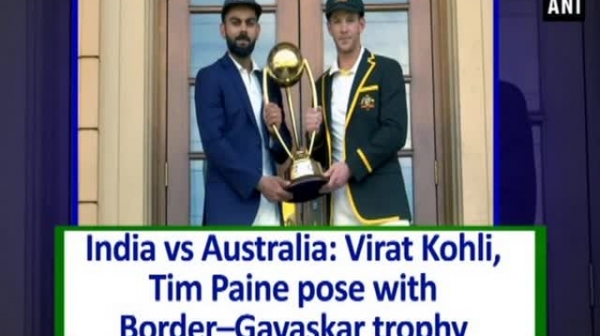 "Both (winning matches and hearts). That's what we are here for, we play Test cricket to win, there is no doubt about that and clearly we've realised we needed to do some work in some areas. Gaining the respect of our country is as high a priority as is winning," said the wicketkeeper-batsman in the pre-match press conference here on Wednesday.

"I just had an interview with Ricky Ponting and we went through the names of Australian Test captains over the years so it is a little bit daunting to be in a bracket with some of those guys.

"At the same time I'm trying to keep it as simple as I can. I'm hugely honoured to be captain of Australia but I am not letting it weigh me down too much," he added.

The hosts have named a four-pronged attack with Josh Hazlewood and Pat Cummins returning to the side after missing the Pakistan series in UAE. Paine said playing always helps and he was confident that a four-bowler attack would do the necessary job in the first Test.

"Having Josh Hazlewood and Pat Cummins back in as well is going to be different. The style of play in Australia compared to the UAE is completely different...We are going to go about it the same way we did over there, it's just going to be tactically slightly different. Paine expressed confidence that the four-bowler attack will get through the four Tests without any fitness concerns.

"They got through the Ashes last year I thought and bowled a hell of a lot of overs. So, they are fresh and ready to go. They have had a great preparation and are ready to go.

"They are fine to go. They will be bowling big overs if need be, and they are totally comfortable with that," he said.

Vice-captain and all-rounder Mitchell Marsh was left out of the playing eleven and opener Marcus Harris is set for his international debut. Marsh has been dropped owing to poor form previously and he will be released to play Shield cricket once the match gets underway.

"We know the talent Mitch has. We know most likely at some stage in this series we'll need him, so we're taking the opportunity at the moment to send him back to play a Shield game, get more cricket under his belt, knowing at some stage we're probably going to need him.

"We know he is good enough to be a genuine all rounder at Test level. He probably just hasn't put it together consistently enough. Going forward we've got full faith in him being a Test all-rounder.

"As this series wears on, and we get to places where the wicket might be a bit flatter and conditions might be a little warmer, our bowlers will be a bit tired then the all rounder position becomes important," said Paine.

The Adelaide Oval pitch has a top layering of green grass but with temperatures set to soar from Thursday, it will quickly get baked and take turn as the match progresses.

"The quicks are going to have to bowl a bit more and we have full faith that Nathan Lyon can do the job in any conditions. He's shown that over the last few years.

"Travis Head bowls some handy off spinners so we have options there but we'll be backing our bowlers," he said. Paine reiterated his confidence that a four-bowler attack would be good enough to see Australia through this first Test.

"It's probably unlikely that we'll use the three quicks as much as we will in this game, throughout the whole series as it wears on, but this being the first Test we think they'll do the job," he said.

Paine said given the current conditions, his side was inclined to bat first should it win the toss Thursday morning.

"You want to bat on days when it's 40-odd degrees. There's always a good coverage of grass here in Adelaide and it offers a bit with the new ball, but there's also a lot of runs to be had out there," he said about the toss.

When asked about targeting India's lone spinner R Ashwin in this match, he replied the game-plan is going to be quite similar for even the Indian batsmen.

"I'm sure there will be opportunities at times when we can hopefully put their spinners under pressure and try to put some big overs into their fast bowlers.

"It is going to be no different for them; they are going to see at times if they can attack Lyon and get on top of him...so it is going to be a real chess match in that regard," he said.