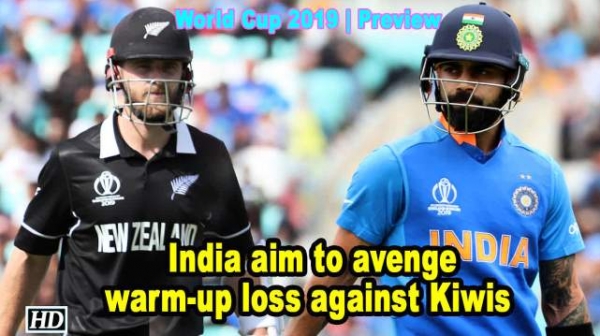 Nottingham, June 12: India will face New Zealand in the ICC World Cup 2019 game on Thursday (June 13) and it will be a match between two sides who have remained unbeaten so far in the tournament. While New Zealand have a rather settled combination, India will be forced to make one change at least.

Opener Shikhar Dhawan, who have suffered a hairline fracture on his left thumb in the match against Australia, will sit out and India might ask KL Rahul to open the innings. With Rahul, who has batted at No 4 in the tournament so far, going up the order, India might opt to field either Dinesh Karthik or Vijay Shankar at No 4 depending the conditions at Trent Bridge. MyKhel takes a look at India probable XI.

Rohit Sharma With a hundred and fifty in as many games, Rohit Sharma seemed to have fell into the right gear. It came as a big relief for Indian camp and Rohit would like to come up with another substantial innings against the Kiwis, and it is important in the absence of injured Dhawan.

He had two reasonable outings against South Africa and Australia, against whom he came at No 6 and made a few quick runs including a first-ball six. But against New Zealand he will have to open in the absence of injured Dhawan and Rahul will be eager to exploit the chance in his favourite batting position.

After wasting the start against South Africa, the imperious Kohli returned to the park with a fluid half-century against Australia, his favourite opposition. The Indian skipper will be looking to go one better against the Kiwis at Nottingham.

Nottingham is a venue that has offered plenty of assistance to batsmen in the recent past. England's world record ODI total 481 came at this venue and India may look to fortify their batting adding Karthik, a batsman who can accelerate and anchor in equal measure. And they also have the option of playing Vijay Shankar, who is a solid bat and a handy medium pacer, if the conditions remain overcast.

Dhoni made two impressive outings in this World Cup against South Africa and Australia. Against SA, he played the foil to Rohit while against the Aussies, Dhoni produced a quick innings that needed at the time. He will be training his eyes on the Kiwis now.

He has not been able to join the party with bat or ball either so far. Apart from turning his arm for a few overs, Jadhav has been a silent spectator so far, except a good throw to run out Aaron Finch. He will be keen to come up with a meaningful effort soon.

Pandya showed what he can do with the bat with a brutal cameo against the Aussies that ultimately made the difference in that match. Though with the ball, he has been middling so far and he would like to change that with a couple of wickets against NZ.

The medium pacer, who was picked ahead of Mohammed Shami, has been splendid in India's first two matches. He has kept his end tight and picked up a couple of wickets as well. His support role has immensely helped Bumrah.

The chinaman bowler has supported Chahal in both the matches. And he should be able to keep his place unless the team management wants to play Shami, the third genuine seamer, if Trent Bridge remains bleak.

The Indian pace spearhead has lived up to his billing so far coming up with good spells against both South Africa and Australia, against whom he was a tad expensive. But he took three wickets against the defending champions and Bumrah will be eager to continue his good work against the Kiwis.