New Delhi, Jan 17: Team India rode on fine performances from two of their most bankable stars in the second one-day international against Australia and levelled the three-match series in Adelaide. The third and deciding ODI between the two teams will be played in Melbourne on January 18 (Friday) and win would be on the minds of both the teams.

India would be upbeat with their efforts in the previous game as captain Virat Kohli and his predecessor MS Dhoni pulled off a superb run chase for the visitors in scorching Adelaide heat.

Team India must have got a lot of confidence from their efforts in the must-win second ODI as they kept their hopes of winning the series alive and end the historic tour of Australia on a dominant note. 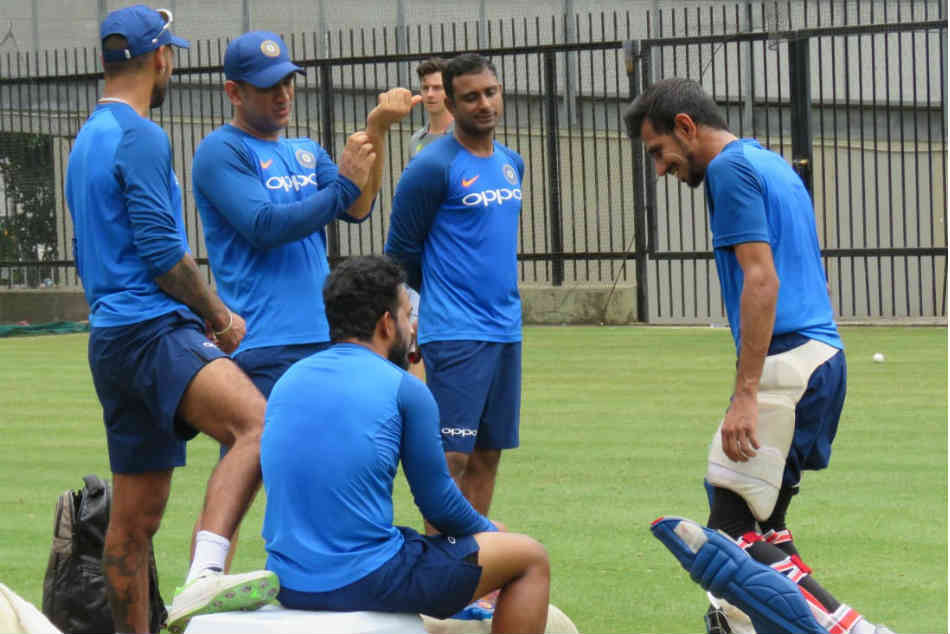 The Men In Blue drew the T20I series, won the Test rubber and must be eyeing to seal the one-day series as well. But the hosts have played some really good cricket in both the games. Had it not been the vintage Dhoni show after Kohli got out for 104, the hosts could have secured the series at Adelaide Oval.

With the series evenly poised, both the teams would leave so stones unturned to clinch a win in the third and lift the series. India checked almost every box in the second ODI but there be a possible change in their side.

Here's what India's Probable XI might be in the third ODI:

The Hitman slammed a superb ton in the first ODI, that went in vain as India lost the match, but followed it up with 43 in the second to set the tone for a run chase of 299.

In the first ODI Rohit scored 133 and went short of companions in the tricky run chase and failed to notch up a fine fifty in the second but the right-handed opener had done his job to give the visitors a steady start.

Along with his opening partner Shikhar Dhawan, Rohit forged a partnership of 47 runs for the first wicket and added another 54 runs with Kohli before getting dismissed for 43 of 52 deliveries.

Rohit's average as an opener in Australia is a staggering 98.62 in Australia and the right-handed batsman will be looking to improve these impressive form in the third ODI as well. Rohit was in sublime touch in the limited-overs format in 2018 and started 2019 on a similar note.

The left-handed batsman from Delhi had a forgettable outing in the first ODI after getting dismissed for a duck.

Dhawan played sensibly in the second game and scored a quickfire 32 off 28 and gave his team an aggressive start in a big run chase.

By the time he was dismissed in the 10th over, India were nearing 50. Dhawan would look to get to a big score in Melbourne because Kohli and Rohit have already posted centuries in the series and India's top-three are a big reason for their wins.

The captain charismatic and chase master was once again at his imperious best in the second ODI. Kohli slammed a century in hot weather conditions in Adelaide as Men In Blue chased down a big total on a surface that was getting slower.

With his knock of 104 off 112 deliveries, Kohli notched up his 39th ODI ton and 24th while chasing and guided his team to a big win over Aussies. Team would once again hope for a similar effort from Kohli in their final game of Australia tour.

The Hyderabad batsman batted at No. 4 in Sydney and Adelaide but failed to leave a mark on both the occasions. If he perished for a duck in the first ODI, the right-handed batsman never looked at ease during his knock of 24 in the second.

The 33-year-old however forged a partnership of 59 runs with the skipper but it was relatively slower than what one expects from Rayudu.

The right-handed batsman is playing international cricket after a gap of a couple of months and it could be a reason he hasn't looked in his zone in the first two games.

Rayudu would be looking to get some runs to his name in the third ODI and head New Zealand with some confidence.

The 37-year-old wicketkeeper-batsman silenced his critics for some time with his match-winning knock of 55 not out in the second ODI. Dhoni - who came under fire for his slow fifty in Sydney - came back strongly and once again showed why he's still the best finisher.

Dhoni read the conditions well and forged partnerships with Kohli and later with Dinesh Karthik as India reached home with four balls to spare.

He seemed so much engrossed in his work to take India home that he almost forgot he had completed his fifty and raised his bat only when his partner Dinesh Karthik reminded him.

Captain Virat Kohli termed his predecessor's innings as an 'MS Classic' as entire cricketing fraternity was pleased to see Dhoni finding his touch.

Team would hope for such match-winning performances from the senior-pro in the upcoming games as well.

The Tamil Nadu cricketer played a short yet important knock of 25 off 14 deliveries in the second ODI. Batting at a strike rate of 178.5, Karthik ensured Dhoni doesn't face too much of pressure on his shoulders.

India were still 57 short of the target when the right-handed batsman entered the pitch in the 44th over, but Karthik paced his innings exceptionally well and put pressure on the Aussie bowlers from his end to ensure the asking rate doesn't go beyond their reach.

Karthik is proving out to be a dependable batsman in the middle order with such valuable knocks.

The Saurashtra all-rounder was the second most economical bowler for India in the second ODI. The left-arm spinner conceded 49 runs from his 10 overs and bagged the wicket of Peter Handscomb.

Jadeja ended Usman Khawaja's innings at 21 with a sensational running throw towards non-strikers end when the latter's partnership with Shaun Marsh was getting dangerous.

Ravindra Jadeja can also perform the all-rounder's duties along with teaming up with chinaman Kuldeep Yadav in the spin department.

One of the biggest positives for India from the second ODI was Bhuvneshwar Kumar finding his form back. The strike pacer once again proved dangerous with the new ball and looked equally threatening with the old ball in the death overs.

Bhuvneshwar returned with figures of 45 for four and prevented the Aussies from posting a total in excess 300 which they looked heading comfortably at one stage.

Bhuvneshwar accounted for the big wickets of Glenn Maxwell and Shaun Marsh in one over to halt the hosts' charge. Team would hope for a similar show from him in the third match.

The Tamil Nadu all-rounder came as a replacement to Hardik Pandya and reports have it that he might get his ODI debut in the all-important game at MCG.

Since Khaleel Ahmed and Mohammed Siraj failed to impress in the one match they both played, team management might look towards Shankar in the third ODI. Shankar was included in the side for his good performance for India A during their tour of New Zealand.

The wrist spinner has been warming up the benches and waiting for an opportunity in the ODI squad ever since was included in the side as an all-rounder in the absence of Pandya. Since, India didn't get the desired results from the pacers Siraj and Khaleel as the fifth bowler, team management might look towards Chahal if they do not want to hand over a debut cap to Shankar.

The left-arm wrist spinner returned 54-2 in the first ODI and remained wicketless in the second. The finger spinner went for runs in both the games and would be eyeing to make a comeback in the third ODI.

Kuldeep looked good with the ball in Sydney and Adelaide but a couple of bad overs spoiled his figures in both the games. The chinaman has been India's key bowler in the limited overs format and once again a lot depends on his performance in the middle overs.

The senior Bengal pacer, who had an impressive Test series against Aussies, is continuing his good form in the white ball cricket. Shami remained wicketless in the first ODI but conceded runs at 4.6 per over.

In the second ODI, he was even better as the right-arm pacer claimed three wickets. Together, he and Bhuvneshwar accounted for 7 Australian wickets in Adelaide and the captain would be hoping another dominant show from his seasoned quicks at MCG.