Team India defeated New Zealand by 6 wickets in a nail-biting low-scoring thriller in Lucknow and levelled the series 1-1.

Fans couldn't have asked for a better game of cricket as it kept everyone hooked till the end.

Chasing a target of exactly 100 runs, the Men in Blue reached home in 19.5 overs on a pitch which had a lot on offer for the slow-ball bowlers. 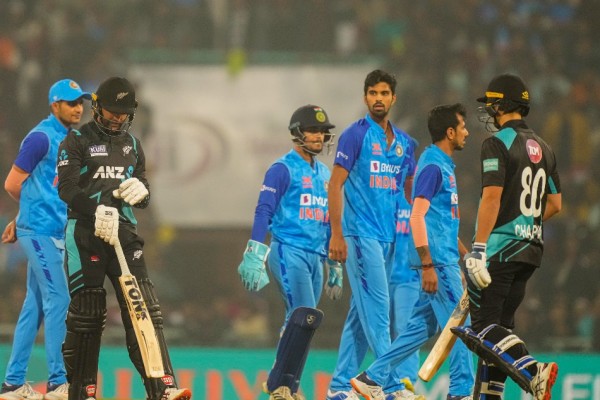 It was the first instance when a T20 match saw 30 overs being bowled by spinners. Batters from both sides were tested by spinners on a surface which was testing them.

Suryakumar Yadav was the highest run-scorer in the match with his unbeaten knock of 26. The right-handed batter - who is ranked number 1 in the T20Is - had to curb his instincts on a tricky surface and didn't hit a single maximum.

No sixes were hit in the entire game. Captain Hardik Pandya remained unbeaten on 15 and helped his team cross the finish line.

Two Indian batters were dismissed via run-outs and both of those dismissals looked like a comedy of errors for the hosts it could have proved fatal for them in the run chase had there been 15-20 runs more on the board.&nbsp;

Earlier in the day, Yuzvendra Chahal showcased his skills with the ball and ensured his team restrict New Zealand to 99 for 8 in the stipulated 20 overs. It was Blackcaps' lowest T20 total against India.

But credit goes to New Zealand skipper Mitchell Santner as he rotated his bowlers brilliantly in defence of 99.

The two teams will now head for Ahmedabad for the decider on February 1.