David Miller's sensational century went in vain as India managed to beat South Africa by 16 runs in a high-scoring game in the second T20I at Guwahati.

Defending a mammoth 237, the Men in Blue prevented the Proteas from overhauling the target as they could only muster 221 runs for the loss of three wickets. After losing three wickets early in the run chase, Miller (106* off 47) and De Kock (69* off 48) shared an unbeaten 174-run partnership for the fourth wicket but failed to take their team home. 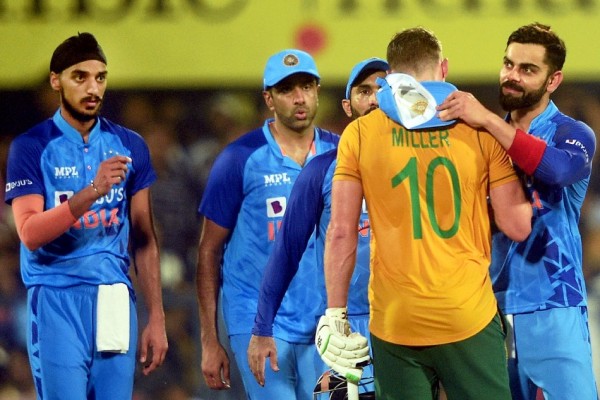 It was India's first T20I series win over Proteas on home soil. But it was Miller who stole the show with his explosive knock and kept Indians on the tenterhooks.&nbsp;

Miller also became the leading run scorer for South Africa in T20Is tonight but he couldn't take his team home.

Indian bowling in the death overs came under scrutiny once again as they kept leaking runs. Arshdeep Singh and Harshal Patel together conceded 105 runs from their quota of 8 overs.&nbsp;

However, batting first, Team India posted their fourth-highest T20I total as they rode upon some blistering batting performance from their top-order batters.

KL Rahul and Rohit Sharma laid the foundation for a big total as they shared a stand of 96 runs for the first wicket. Rahul slammed a 24-ball 50 and put the debate about his strike rate to rest.

Keshav Maharaj was the only economical bowler for South Africa as he dismissed set openers in quick succession. But Suryakumar Yadav showcased his 360-hitting skills and notched up the joint-fastest fifty from an Indian off just 18 balls. It was his explosive knock which helped the Indians post a massive 237 for the loss of three wickets.