South Africa out-batted, out-bowled and out-fielded India to register an emphatic 49-run victory over in the inconsequential third T20I in Indore. 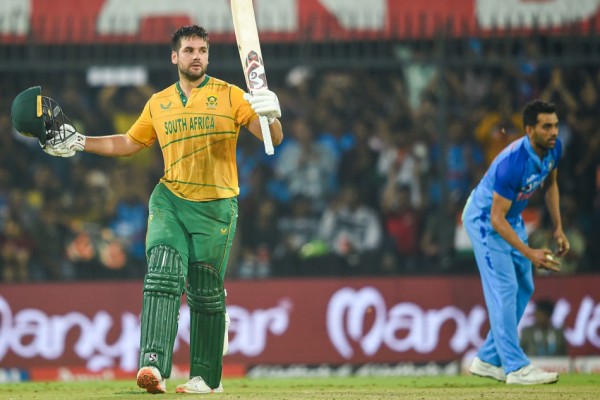 Rilee Rossouw kept the disappointments of two consecutive ducks in the first two games aside and smashed a sensational 48-ball 100* and propelled the Proteas to a massive 227 for three after being invited to bat first. Quinton de Kock's second consecutive half-century to regain his form. Along with Rossouw, QDK shared a stand of 90 runs for the second wicket and laid the foundation for a big total.

Making full use of the small dimensions of the Indore stadium and the wrong lines bowled by the Indian bowlers, Rossouw and the remaining batters kept attacking to guide their team to a big total.

Chasing a mammoth 228 in 120 balls, the Indian batters failed to take any responsibility and kept throwing their wickets away to eventually get bundled out for 178 in 18.3 overs.

Dinesh Karthik - who was promoted at number 4 - top-scored 46 but like every other batter, he too threw his wicket away as the hosts failed terribly.

Dwaine Pretorius - who was playing the first match of the series - was the pick of the bowlers with 3/26. While Wayne Parnell, Lungi Ngidi and Keshav Maharaj picked up two wickets each.

Indians won the series 2-1 but their batters would be looking to forget the performance tonight.