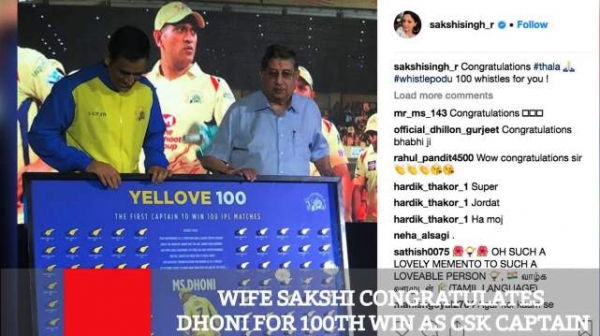 New Delhi, April 28: Indian cricketer Mahendra Singh Dhoni has moved the Supreme Court seeking protection of his ownership rights on an over 5,500-square feet penthouse he booked 10 year ago in a project of embattled Amrapali Group.

Dhoni filed an application in the court through his lawyer, after receiving a notice from apex court-appointed forensic auditors seeking clarification on certain aspects of the purchase.

"This application is being moved by the applicant (Dhoni) to protect his rights qua his ownership and possession of Penthouse apartment...in Amrapali Sapphire phase-1 which was agreed to be sold to him vide agreement dated August 31, 2009," Dhoni said in the application, filed through advocate Shekhar Kumar.

The apex court is scheduled to hear the Amrapali matter on April 30. Dhoni said the apex court had on December 5 last year directed the forensic auditors to issue individual notices to home buyers who booked the flats on a paltry sum.

The former team India captain said his authorised representative has given a detailed reply to the notice sent by the forensic auditors. Dhoni said he has paid Rs 20 lakh for the property but only some work for the penthouse has been done and he has not been given the possession.

"It is respectfully submitted here that the price paid by the applicant is certainly not a paltry amount," he said, adding that because he was associated with the Amrapali Group as their brand ambassador, he got the penthouse at a lower price.

This cannot be a ground to question the otherwise genuine agreement, he said. While the affidavit mention no market price for the property, it is estimated that it is worth over Rs 1 crore. Dhoni said that like other home-buyers and creditors, he has also been duped by the Amrapali Group.

He sought direction from the court that the allotment of the penthouse is not questioned and he be allowed to take its possession. On April 9, the apex court had expressed annoyance over "circulation" of forensic auditors' report among lawyers on the Amrapali Group before it was submitted to the court.

The top court said it will hear from April 30 the pleas of home-buyers on whether the property titles can be given to them. It had said it will also look into the ways the money diverted to other ventures by Amrapali can be realised and the stalled projects be completed.

The court had said that if anyone has to benefit from the Amrapali case it is the hassled home-buyers who invested their earnings but were not given the flats. The court had taken on record the final report comprising nine volumes submitted by the two court appointed forensic auditors and directed them to finish their work by April 28.

The forensic auditors, Pawan Agrawal and Ravi Bhatia, had told the court that they have found that over Rs 3,000 crore of home buyers' money was diverted by Amrapali promoters. They said over 100 shell companies were formed by the group to divert the money.

On February 28, the apex court had allowed the Delhi police to arrest and interrogate in custody Amrapali group CMD Anil Sharma and two directors on a complaint that home-buyers of their various housing projects were cheated and duped of their funds.

The top court, which is seized of several pleas of home-buyers seeking possession of around 42,000 flats booked in projects of the Amrapali group, also ordered attachment of personal properties of the CMD and directors -- Shiv Priya and Ajay Kumar.

The trio, under detention of the Uttar Pradesh police and kept in a hotel at Noida since October 9 last year by the apex court for not complying with its orders, was in for a shock when the court ordered the arrest on a plea by Economic Offence Wing (EOW) of Delhi Police saying that it wanted to quiz them in a separate cheating case.

The court had also appointed a valuer to ascertain the exact value of 5,229 unsold flats including those booked by Amrapali for just Rs 1, Rs 11 and Rs 12 and asked the valuer to submit its report.