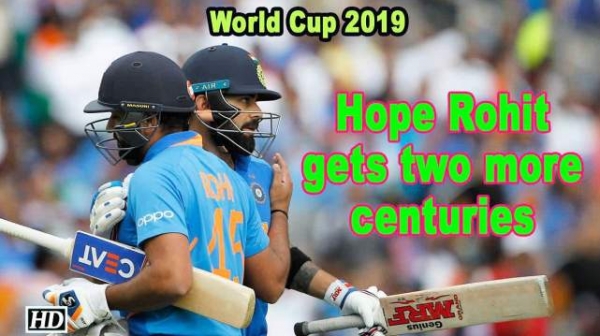 Manchester, July 8: Virat Kohli said on Monday Rohit Sharma's blistering form has made him alter his own role in the top-order as India gear up for Tuesday's ICC World Cup 2019 semifinal against New Zealand here at the Old Trafford.

Sharma has smashed a record five centuries in a single World Cup to lead the tournament batting charts with 647 runs from eight innings.

Kohli has hit five fifties but a hundred has so far eluded the world's top ODI and Test batsman, who is happy to let Sharma play the more aggressive role when they face New Zealand at Old Trafford.

"It's been a different kind of role that I have had to play in this World Cup. As the captain of the team I have been open to play any role that the team wants me to," Kohli told reporters.

"It's great that Rohit is playing so consistently which means that coming in the later half of the innings you have to play a different role, which is controlling and letting guys like Hardik (Pandya), Kedar (Jadhav) and MS (Dhoni) and Rishabh (Pant) come out and express themselves. I have understood that roles can vary a lot in one-day cricket depending on the time you step in to bat."

Rohit comes in to the New Zealand contest on the back of three successive tons and two 180-plus opening stands with partner KL Rahul.

Kohli, who bats at number three, was unbeaten on 34 when India won their final group game against Sri Lanka and said he was happy doing his more low-key job.

"I've been very happy with holding one end and letting guys express themselves, striking at 150, 160 or 200 if the team needs. I know that I can accelerate in the end," Kohli said.

"I hope he (Sharma) gets two more (centuries) so that we can win two more games because it's an outstanding achievement.

"He deserves all the credit and, according to me, he's at the moment the top ODI player in the world."

India's matches in England have witnessed packed houses with fans of the cricket-crazy nation thronging to the venues carrying the Indian tri-colour and wearing blue replica shirts.

Kohli acknowledged the pressure each game brings, but he was adamant the team is used to performing under such high expectations.

"Look, the Indian team always carry a lot of pressure whenever we play. We are used to that to be quite honest," said Kohli, who was part of India's World Cup-winning team in 2011.

"We are better equipped to react in these situations because we know what these kind of games and our fan base and the expectations bring. The disappointment is equal on either side. Our aim and our focus is on winning."

MS Dhoni is unlikely to feature in the next edition of the 50-over World Cup as the wicketkeeper-batsman turned 38 on Sunday.

Kohli sidestepped questions on a possible send-off for the former captain as he praised the veteran's contribution to Indian cricket.

"I am certainly not going to write anything down," Kohli said in response to the potential for Dhoni to say farewell.

"I am sure everyone, if you ask them about him, they have special things to say. Especially those who started their careers under him.