Kolkata, January 20: Hyderabad FC cut the deficit to the top back down to four points after a tightly-contested 2-0 victory over East Bengal FC in the Hero Indian Super League (ISL) at the Vivekananda Yuba Bharati Krirangan in Kolkata.

Javier Siverio scored the opening goal of the match in the 9th minute and substitute Aaren D'Silva wrapped up the three points in the 93rd minute.

The defending champions will have a chance to reduce the gap further as their next game will be against the unbeaten Islanders, in a fixture that could decide the ultimate winner of the League Shield.

Eager to stay hot at the heels of Mumbai City FC, Hyderabad FC got off to a flyer. Borja Herrera whipped a looping cross into the box from the left side of midfield and it dipped straight onto the head of an unmarked Siverio. The striker's cushioning header saw the ball fly in at the far post as Kamaljit was rooted in his spot.

The East Bengal FC shot-stopper was alert to deny Siverio a second goal minutes later when Hitesh Sharma's shot from inside the box came straight to the Spaniard and his close-range shot was blocked by Kamaljit. 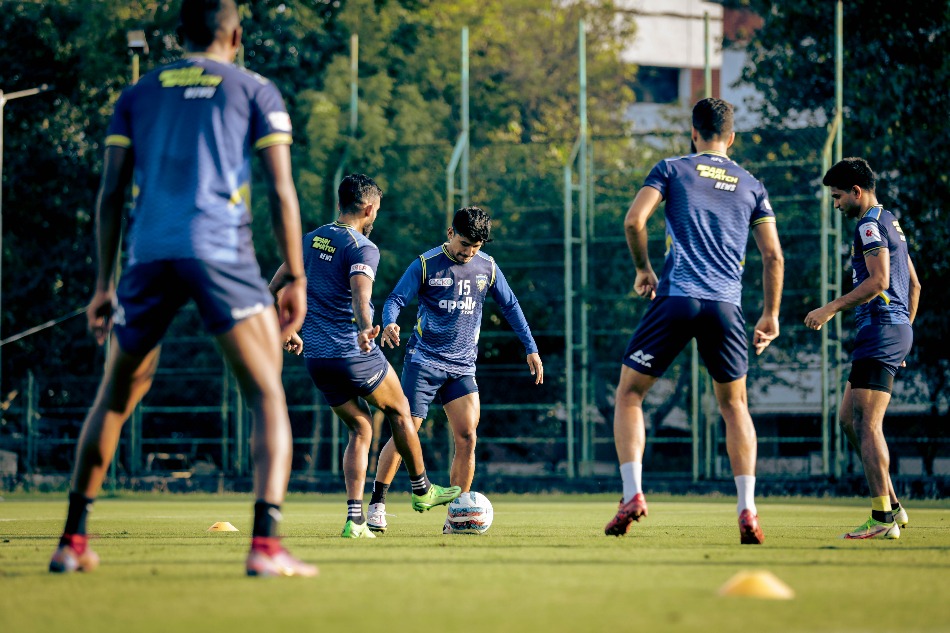 Midway through the first half, in a game being dominated by the defending champions, the Torch Bearers advanced into Hyderabad FC's half after a series of good passes, only to mistime the decisive pass inside the box. Minutes later, Lalchungnunga's long throw from the right flank was headed onto the crossbar by Suhair VP.

Less than ten minutes from the break, Bartholomew Ogbeche slid a pass straight to Siverio, who laid it off for an oncoming Rakip. The full-back entered the box and forced another save out of Kamaljit from a tight angle as Hyderabad FC went in at half-time with a narrow advantage.

Rakip's first start for the club lasted only 45 minutes as Jerry Lalrinzuala came on to replace the left-back for the second half. Four minutes in, Mohammad Yasir's sliced clearance passed the ball straight to Cleiton Silva in front of goal, but the Brazilian could not keep his effort on target.

In the 66th minute, a well-worked Hyderabad FC corner was cleared away but only as far as Ogbeche, who attempted an overhead kick but saw his effort go wide. Moments later, at the other end, Silva beat Odei Onaindia but failed to beat the outstretched foot of Gurmeet Singh with his goal-bound strike.

In the third minute of stoppage time, a cheeky back-heel from Ogbeche allowed D'Silva to have a run at goal from a tight angle. The substitute kept his composure and buried it past Kamaljit to seal the victory.

The defending champions will go into their break four points behind Mumbai City FC, with their next game against the league leaders on February 4 as the title race intensifies.

East Bengal FC have been dealt a blow in their race to the playoffs. The Torch Bearers are still in ninth place, eight points off the final playoff spot, which their next opponents, FC Goa, currently occupy.