Mourinho - managing his 300th Premier League match - was handed a pre-match blow in the shape of a Paul Pogba injury and United sorely missed his presence in midfield, as Pep Guardiola's men claimed victory without hitting top gear.

A breathless City opening soon dissipated after David Silva gave them an early lead, but Sergio Aguero blasted them further ahead three minutes into the second half.

An Anthony Martial penalty handed United a lifeline, but City's win rarely looked in danger and Gundogan wrapped things up late on.

City's 12th-minute opener was the least they deserved for a fluid start, as David Silva fired past David de Gea from close range after Bernardo Silva had knocked Raheem Sterling's delivery back across goal.

United improved slightly after falling behind, with Martial and Jesse Lingard looking bright, but clear-cut chances eluded them.

Chris Smalling went closest for United with a header which went comfortably over in the 26th minute, but otherwise, the City defence was at ease in the first half of few highlights.

City looked reinvigorated at the start of the second and swiftly doubled their lead.

Aguero linked well with Riyad Mahrez on the edge of the box and sent a fierce strike beyond De Gea, who arguably could have done better.

Mourinho responded by introducing Romelu Lukaku from the bench and he made an immediate impact, getting hauled down by Ederson 30 seconds after coming on and Martial coolly dispatched the resulting spot-kick.

But City sealed the win four minutes from time, Gundogan slotting past De Gea after collecting Bernardo Silva's right-wing cross at the conclusion of a move that featured 44 passes.

What does it mean? United midfield options not good enough

While Nemanja Matic and Marouane Fellaini put in good shifts, the match highlighted the gulf in class between the two teams' midfield options. Without Pogba United looked devoid of craft in possession, but City - without Kevin De Bruyne - never had such problems.

Mourinho's set-up appeared to put a lot of emphasis on stopping City's midfield from playing, yet still David Silva controlled things and looked a cut above, opening the scoring in composed fashion. 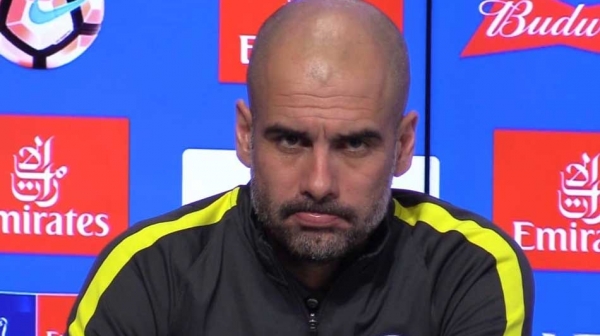 Two points is nothing - Guardiola on Premier League title race

While his combative approach was necessary, on several occasions Herrera cheaply gave possession away in his own half to put United in a spot of bother. He was lucky not to be punished.

After the international break, City are in action away to West Ham in the Premier League, while United host Crystal Palace.