Bengaluru, April 16: Bayern Munich shocked the world last Friday by announcing that they had hired Eintracht Frankfurt manager Niko Kovac as the replacement for Jupp Heynckes, who will leave at the end of the season. Munich brought Heynckes back at the helm following the sacking of Carlo Ancelotti in October 2017 due to a poor start to their Bundesliga campaign.

Heynckes insisted that he'll remain with the team only on a short-term basis and after guiding them to their record sixth straight Bundesliga title, the legendary coach made it clear that he'll leave the club at the end of the season. Bayern are still on course for the treble with the Champions League and DFB Pokal (German Cup).

While former Borussia Dortmund coach Thomas Tuchel was tipped to be the successor for Heynckes at Bayern, the club shocked all by announcing Kovac's appointment.

Jupp Heynckes confirms he is to leave @FCBayern in the Summer.

Niko Kovač will take over as head coach from 1st July 2018 🇩🇪 pic.twitter.com/3Cvr9TSRmt

According to Uli Hoeness, the president of the Bundesliga giants, the club decided to go with Kovac after being turned down by Tuchel. He also claimed that Kovac wasn’t an option and was third in line behind Heynckes and Tuchel.

Niko Kovac is a Croatian and has been a former player at Bayern Munich. He spent two seasons at the Bavarian club. However, Kovac did not manage to establish himself as a regular at the club and left Bayern for a second stint with Hertha BSC after two seasons in the summer of 2003. He appeared in 34 Bundesliga matches and scored three goals for Bayern in the league.

Kovac retired at RedBull Salzburg and went on the coach their U-21 side before becoming the manager for their main side. Kovac was manager of his national side Croatia as well before making a return to Bundesliga in 2016 as manager of Eintracht Frankfurt. 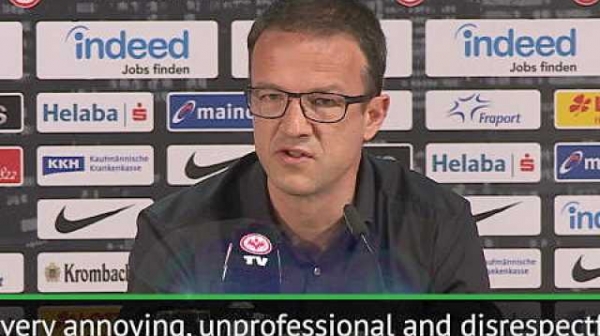 Fredie Bobic, a board member at Frankfurt, slammed Bayern for the timing of their announcement, saying it came just before Frankfurt had to play a crunch game in the Bundesliga.

"The timing is unfortunate, and the fact information has leaked to the public - certainly not from Frankfurt, but from Munich - is disrespectful, unprofessional," he was quoted as saying by the goal.com.

"We have a very important match against Bayer Leverkusen and next week in the cup against Schalke, which should actually be the topics today.

"The procedure, I think, is extremely questionable, as I said before. Bayern have thought of themselves and not for a second about Eintracht Frankfurt.

"I respect the colleagues from Munich, but they want something from us, so they have to call us, but that did not happen.

"It's disrespectful. We will not talk about it with Bayern now, but we will look for dialogue again in the near future."

Frankfurt eventually lost the game 1-4 to Bayer after a hat-trick by Kevin Volland.