With Eden Hazard rested ahead of Sunday's Wembley clash, Alvaro Morata and Olivier Giroud were paired in attack for Thursday's 2-1 Premier League win at Burnley. 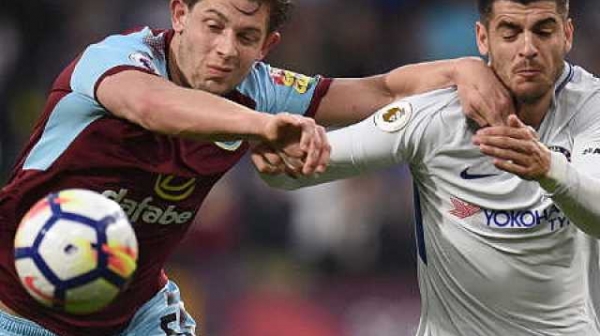 The Clarets struggled to cope with the physical duo, but it was Victor Moses who starred with a goal and an assist to help Chelsea record successive wins on the road.

And an impressed Conte indicated he will consider selecting a 3-5-2 formation again in the FA Cup after seeing his side mark his 100th game in charge with a victory that narrows the gap between the Blues and the top four to five points.

100 - This was Antonio Conte’s 100th match in charge of Chelsea in all competitions – only Jose Mourinho (72) has won more of his first 100 games in charge of the Blues than Conte (65). Impressive. pic.twitter.com/RDsPgYZydo

"We played a good game against a difficult team because it is not simple to play against Burnley," Conte told BBC Sport.

"We played the game very well and the two strikers worked very well. They played a fantastic game with and without the ball. The whole team played an intensive game. We deserved to win.

"This is a really good option [two strikers]. In the past it was very difficult for me to try this option with the two strikers but they showed a great link and a great combination and at the same time they worked very hard for the team.

"For sure we will try to reach the FA Cup final. It won't be easy but we must be ready to fight. I saw a fantastic spirit tonight. We must continue this way."

Conte explains that he took Morata off because he wanted to put a fresh player on at that stage, not because Morata had missed a chance. #BURCHE

But the Clarets are eight points clear of nearest rivals Leicester City, with seventh spot enough to secure European qualification as long as Southampton do not win the FA Cup, and Dyche praised his team's performance against last season's champions.

"They had a couple of moments and golden chances from our bad play but mainly we defended resolutely, we were effective at times to try and open them up," Dyche told Sky Sports. "There has been a lot of noise around their camp but they're still a top side.

"It's not easy when you're 1-0 down to come out and take the game on but we did that, there's certainly no disappointment as we were playing a top side.

"They played well out of trouble and were a threat on the counter but it was a close thing, closer than we've been in the past against these sides. It's very difficult and to get where we are is difficult but that's the challenge."