Burnley, April 20: Victor Moses struck the winner as Chelsea edged a tight 2-1 Premier League victory against Burnley, Antonio Conte having named Eden Hazard among the substitutes with an eye on the FA Cup semi-finals.

Burnley looked set to claim a point thanks to Ashley Barnes' lucky equaliser, but Moses came up with the decisive goal in the 69th minute to boost his side's slim hopes of Champions League qualification.

Winning at Turf Moor on Thursday (April 19) moves Chelsea within five points of London rivals Tottenham in the battle for a top-four finish, Conte's decision to leave Hazard and Willian on the bench at kick-off ahead of Sunday's clash with Southampton at Wembley justified by the result.

Kevin Long's own goal gave Chelsea the lead, the defender bundling a Moses centre in after Gary Cahill's long pass sent the wing-back behind the Clarets' back line.

Barnes inadvertently deflected in Johann Gudmundsson's shot past Thibaut Courtois for his eighth Premier League goal of the season but Sean Dyche's side saw their five-game winning streak end thanks a rapid response.

Moses was a threat down the right all game and the wing-back thumped in a low drive that beat birthday boy Nick Pope at his near post to claim all three points for the visitors.

Conte paired Olivier Giroud and Morata in attack and the Spain forward had the game's first chance from a tight angle, Pope saving with his right boot. 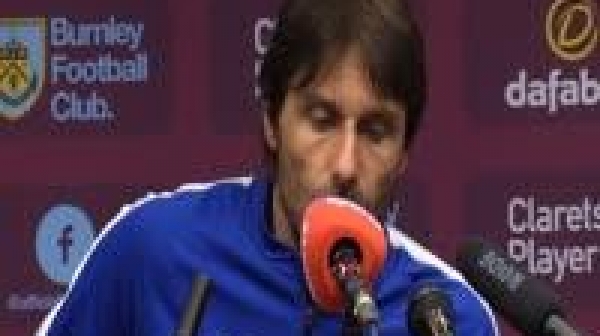 Chelsea must win every game for top four - Conte

Pope was helpless as Chelsea took the lead in the 20th minute, though, the goalkeeper touching on a Moses cross that deflected into his net off defender Long.

Burnley were struggling to cope with Chelsea's front two and Pope had to be quick off his line in the 32nd minute to deny Morata after the striker was played into the box by Giroud.

The visitors were given a golden chance to double their lead after the break when N'Golo Kante intercepted a poor Matt Lowton pass and sent Morata clear, but despite Pope's hesitance the striker somehow fired wide of the post.

Moses burst away from a static Burnley midfield to get into the box but fired straight at Pope, who was again keeping club captain Tom Heaton on the bench.

The Clarets promptly levelled with their first shot on target of the match in the 64th minute, although there was a huge slice of luck involved.

Gudmundsson cut inside from the right and fired at goal, his strike taking a massive deflection off Barnes - onside despite Chelsea protests - to wrongfooted Courtois.

Within five minutes Chelsea were back in front, Burnley again exposed on their left flank.

Emerson Palmieri - making his first Premier League start - saw his deep cross come through to Moses, who rifled in past an unsighted Pope to restore the Blues' lead.

Dyche sent on Sam Vokes and the substitute striker headed a left-wing Gudmundsson corner straight at Courtois seconds after his 72nd-minute introduction.

A bright Hazard cameo from the bench helped Chelsea close out consecutive Premier League away wins following Saturday's comeback at Southampton, who they face again at Wembley in three days' time.

- Since beating Chelsea in their first match of the season, Burnley have collected just four points from 10 Premier League matches against the big six (P10 W0 D4 L6).

- This was Antonio Conte's 100th match in charge of Chelsea in all competitions – only Jose Mourinho (72) has won more of his first 100 games in charge of the Blues than Conte (65).

- Two of Chelsea's last eight goals in the Premier League goals have been own-goals (Kevin Long tonight and Martin Kelly for Crystal Palace) – their previous two came across a total of 167 goals.

- This was the first Premier League match to feature two Italians for Chelsea (Emerson and Davide Zappacosta) since May 2003 against Liverpool (Carlo Cudicini and Gianfranco Zola).

- This was the 500th game to kick-off on a Thursday within English top-flight league history.