Surat, Oct. 12: The 36th National Games came to a poignant end here at the Pandit Deendayal Upadhyay Indoor Stadium on Wednesday, with Services Sports Control Board, Kerala's Sajan Prakash and Karnataka's Hashika Ramchandra walking away with the top honours.

The Government of Gujarat had stepped in at the last minute to revive the country's largest and most significant sports festival after a 7-year hiatus, successfully putting it all together in less than 100 days. 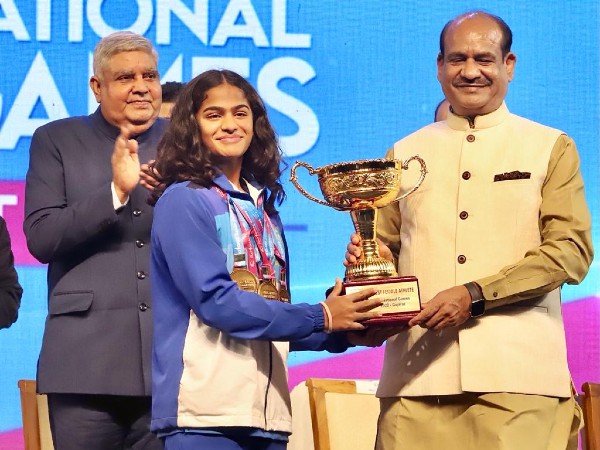 Maharashtra bagged the Indian Olympic Association's Best State trophy for finishing second in the medals tally with the most medals amongst States and UTs.

Gujarat's 10-year-old Shauryajit Khaire (Mallakhamb), who was a reluctant starter after losing his father just a few days back, emerged as the 'viral star' of the Games, becoming its youngest medal winner.

Unmindful of the carnage above them, sporting powerhouses Maharashtra and Haryana engaged in a bitter tussle till the very end before the former emerged as the worthy No. 2 with 39 gold, 38 silver and 63 bronze. Haryana (38 gold, 38 silver, 39 bronze) had to be satisfied with the third position on the table.

Karnataka, Tamil Nadu and Kerala took the fourth, fifth and sixth places respectively on the medal table. Madhya Pradesh, Uttar Pradesh and Manipur finished with a creditable 20 gold each.

Hosts Gujarat also registered their best ever performance in the history of National Games, bagging 13 gold, 15 silver and 21 bronze medals for a total of 49. The hosts finished 12th in the overall standings.

As many as 29 teams won at least one gold and three other contingents finished with at least one medal to show for their efforts.

Vice President Jagdeep Dhankhar said there was a certain energy that one immediately feels when they visit Gujarat. "I have no doubt that all of you will carry home sweet memories of Gujarat.

"Several records were broken in the National Games. But no hearts have been broken," he said, referring to the power of sport in national building.

The Vice President also expressed confidence that the country would soon host the Olympics.

Gujarat chief minister Bhupendrabhai Patel pointed out that sports was beginning to become a way of life in the state as well as country. "Our new Sports Policy should help the athletes in the state to aim higher. To develop the skills of athletes, we have also started the Swarnim Gujarat Sports University and I hope the university helps create Olympic athletes," he added.

Indian Olympic Association secretary Rajiv Mehta said that Gujarat has set a new standard by organising the National Games in just 90 days. "This should be an example to states who will be organizing it in the future," he said, adding Goa will have big shoes to fill when they host the Games in 2023.

The National Games flag was handed over to a delegation led by Sports Minister Govind Gaude from Goa, hosts of the the 2023 edition.