Bengaluru, June 25: Francesco Bagnaia has stormed to pole position for DutchGP at the TT Assen circuit, shattering the all time lap record as he looks to breathe new life into his 2022 FIM MotoGP World Championship title bid.

The Ducati Lenovo Team rider set a 1:31.504 to beat the old benchmark at Assen by more than three tenths of a second. 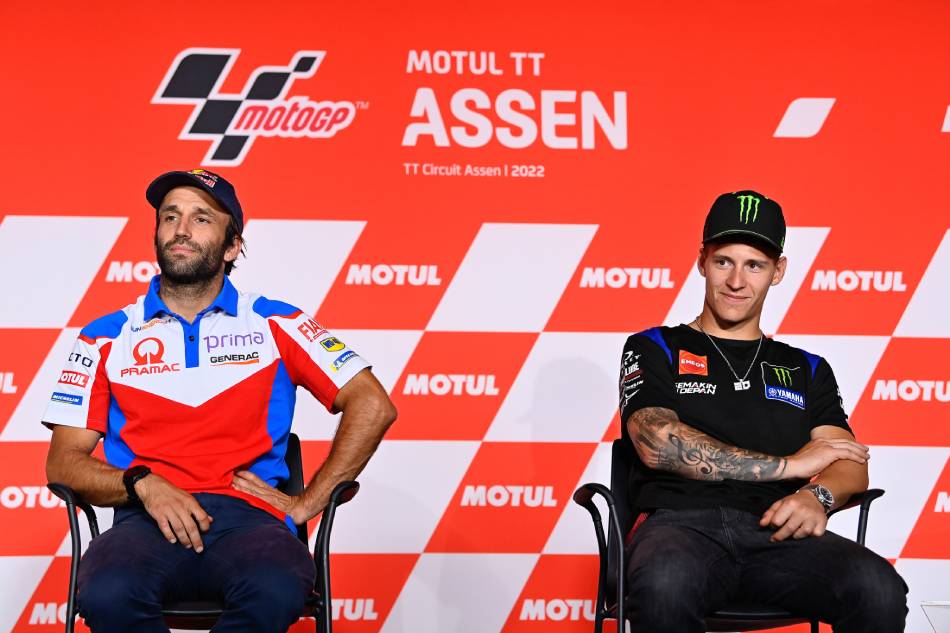 Dutch GP: Could it be a tale of fast and furious at the Cathedral?

Marco Bezzecchi (Mooney VR46 Racing Team) went under the lap record too, setting a 1:31.796 which puts him fourth on the starting grid, while free practice pace-setter Aleix Espargaro (Aprilia Racing) grabbed fifth with a 1:31.868.

That was just 0.364sec away from pole and Espargaro must have felt he had more, considering he vented his anger at Jack Miller (Ducati Lenovo Team) when the Australian triggered a late yellow flag with a spill at De Strubben.

Miller, who would be classified sixth on the 1:32.124 which he set on his first run, then had an even bigger moment with another Aprilia when a flying Maverick Vinales came up slow on his last flying lap.

The Red Bull KTM Factory duo had both gone the long way in qualifying and Brad Binder would eventually claim 10th on the grid, ahead of Vinales and Takaaki Nakagami (LCR Honda Idemitsu).

With isolated spots of rain during Q1, and grey clouds hanging over Assen as Q2 got underway, riders had the hammer down straight away. Both Martin and Quartararo broke the all time lap record on their first flying laps, the former on a 1:31.708 and the latter just 0.010 seconds slower.

At the end of the opening runs, they were still top two and Bagnaia third at 0.311 seconds off the pace, with Quartararo returning to the pits via an excursion through the gravel.

Earlier, Repsol Honda Team's Pol Espargaro pulled out of the race due to injuries sustained at the Sachsenring. Since suffering his fall in Free Practice 1 at the German GP, Pol tried his maximum in order to recover and be fit for Round 11 of the 2022 FIM MotoGP World Championship.

After free practice 2, Pol was still in intense pain and discomfort. Consequently, he felt he was not capable of racing a MotoGP bike and together and decided to sit out the race in Assen.

Luca Marini (Mooney VR46 Racing Team) missed out on advancing to Q2 by just over three tenths of a second and is set to line up 13th on the starting grid.

It had been Joan Mir (Team Suzuki Ecstar) who was third-fastest in Q1 on a 1:32.898 when he folded the front of his GSX-RR at De Strubben leaving him 14th on the grid with Fabio Di Giannantonio taking 15th position.

The MotoGP riders will be back on-track for the warm up on Sunday at 9.40am local time (1.20pm IST) then it's lights out for what is shaping up to be another Assen thriller at 2pm local time (5.30pm IST). Indian audience can catch all the action live on Eurosport channel.

Stay updated with all the happenings around the globe. Click here
View Sample
For Quick Alerts
ALLOW NOTIFICATIONS
For Daily Alerts