It's official ! Marc Marquez to be back for Aragon GP

Bengaluru, September 13: Exactly 110 days after he last raced a MotoGP machine at the Italian Grand Prix on May 29, six-time world champion Marc Marquez will return to competition at this weekend's Aragon Grand Prix.

Since undergoing a successful fourth operation on his right humerus, the eight-time world champion across all classes has followed the strict guidance of his medical team in order to facilitate a full recovery.

After numerous check-ups, consultations and tests, all involved are satisfied with the recovery made and the No.93 will now take the next step in his rehabilitation - returning to competition. 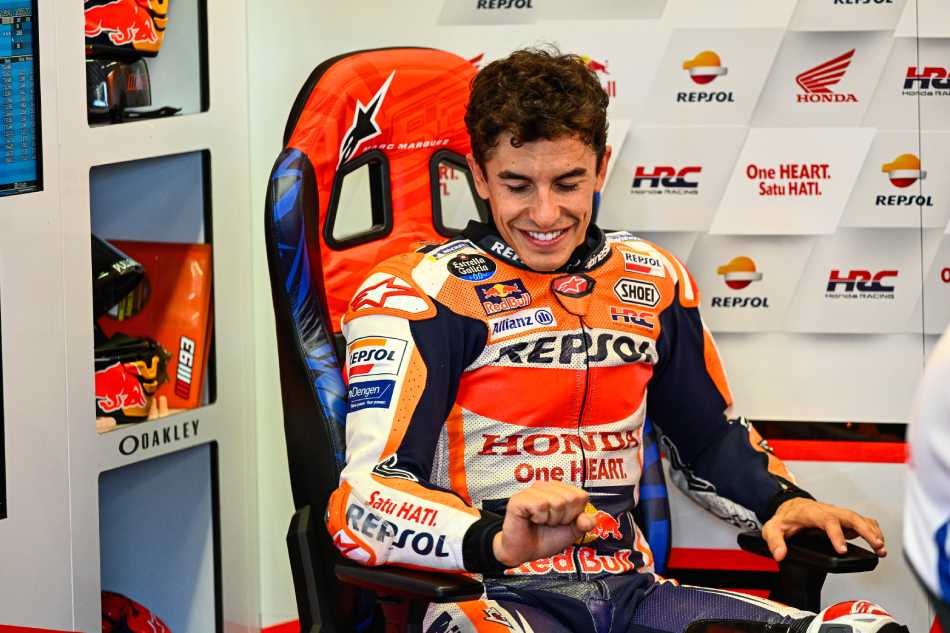 As per a Repsol Honda media statement, the objective for the weekend will be to continue improving Marquez's bike fitness and assessing his performance during the intensity of a Grand Prix weekend and race.

Born in Cervera, MotorLand Aragon can truly be considered a home circuit for Marquez and the home fans have always helped buoy his on-track performance. Marquez has been the fastest rider at Aragon since he moved up to MotoGP, but this year is different.

110 days after he last competed at the Italian Grand Prix, the iconic No.93 will be back out and racing, with little expectation but an incredible amount of attention.

After being passed fit, he did 100 laps at the Misano Test and the electricity was palpable, so what can he do first time out? And what will he be aiming for? After another incredible finish at Misano, MotorLand throws the gauntlet down once again.

Meanwhile, the other Repsol Honda Team rider -- Pol Espargaro -- will be keen to improve after getting tangled up early at Misano through no fault of his own, and it is a home race too for win. Alex Marquez (LCR Honda Castrol) will want to use his experience and good memories of the MotoGP podium at MotorLand to move forward, and Takaaki Nakagami (LCR Honda Idemitsu) has been on pole at the venue.

The chase is on as the triple-header kicks off at Aragon, with the title fight hotting up and Marquez back on track.

The next three weekends put 75 points on the table in 2022 FIM MotoGP World Championship, with the intercontinental triple-header kicking off at the mighty MotorLand Aragon.

Last season it was a duel between Francesco Bagnaia (Ducati Lenovo Team) and Marquez (Repsol Honda Team), and 12 months on the two still dominate the headlines - just for different reasons. Bagnaia arrives into the Gran Premio Animoca Brands de Aragon with four wins in a row, the first rider to do that on a Ducati, and Marquez' long-awaited comeback has now been confirmed.

Can Bagnaia make it five? Will Enea Bastianini strike back? Are Ducati about to hit gold earlier than many could ever have expected? Or can Fabio Quartararo and Aleix Espargaro start to stem the tide? We will find out at 2pm local time (5.30pm IST) on Sunday (September 18). But for now the big news, the motorsports buffs around around the world had been waiting has come. Marquez is back! Buck up guys!