Bengaluru, December 14: WWE will be hosting the annual TLC (Tables, Ladders, and Chairs) PPV event where the marquee matches will take place under a stipulated environment.

WWE's version of toys will be surrounding the ring for these matches which will be contested under No Disqualification rules. It makes the Demolition Derby nickname perfect for the 11th event under TLC chronology.

A historic women's division TLC match for the Tag Team Titles is the potential main event of the night. Roman Reigns is booked to compete in a TLC Match against King Corbin culminating in a long-term feud. 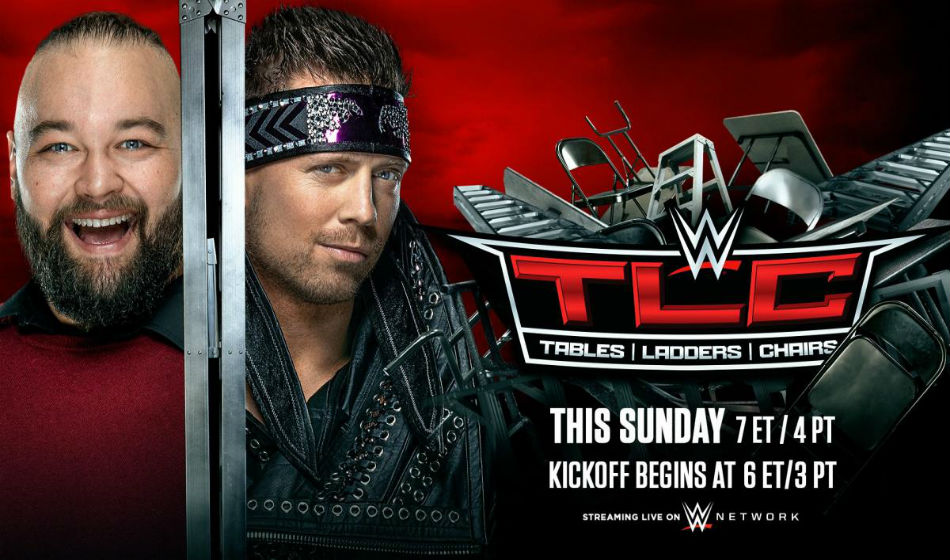 WWE Table Ladders and Chairs 2019: Match card, India time and where to watch

Rusev finally gets his hands on Bobby Lashley in a Tables Match, after months of waiting. Also, several championships will be on the line at 2019 TLC that takes place at the Target Center in Minneapolis, Minnesota.

Check out the match card of the show with predicted results:

The Viking Raiders has been portrayed as the strongest tag team ever since entering the mainstay scene. However squashing enhancement talents, weeks after weeks is eventually proving to be no-good for them. As a result, they do not have any specific opponents at TLC. The open challenge should be accepted by any of the tag teams of NXT since Vince McMahon is willing to give the developmental territory some spotlight, lately. But they definitely won't be able to dethrone the Vikings from their reign.

Prediction - The Viking Raiders will undoubtedly retain whomever WWE pits them against. But it's doubtful whether it benefits them in the long run.

Putting these two hard-hitters against each other will bring out a solid match, no doubt. But when you don't tell a good story involving the two main characters of an angle, it doesn't help to build stronger on-screen character. Black is the favorite in this match at TLC since WWE creative is pretty high on him but without valiant booking, he can't really evolve as a prime time player on Raw, moving forward.

Prediction - Aleister Black picks up the win in a highly physical matchup against a former Cruiserweight Champion.

WWE Universe may not be in favor of seeing this rematch between these two teams, over and over again. Bookings around WWE's tag team division have been stale, any way to raise interest among the fans. So even if the SmackDown tag titles change hands, it won't have much effect. However, with WrestleMania season approaching and The Revival being rumoured to leave the WWE, we don't see The New Day dropping their belts.

Prediction - The New Day retains in a match where the outcome does not matter much.

After months of tug of war in the relationship, Rusev is heading into the match as a recently divorced man. Like a just being freed caged animal, he will unleash all his wrath upon Bobby Lashley who snatched his wife from him. However, the Tables Match stipulation was kept sensibly to hand over a win to Lashley. Lana will provide distractions to his ex-husband so that his current boyfriend can pick up the win. It won't be the final match between the duo, though.

Prediction - Lashley should get the victory at TLC via assistance from Lana which would gain more babyface sympathy from the audience towards him.

It does not matter whether The Fiend or Bray Wyatt competes in this matchup as WWE won't be putting an end to his streak, anytime soon. The Miz does not have much momentum alongside him, as well, ever since leaving the heel persona. With that being said, it must be an easy win for Wyatt at TLC.

Despite hard trying, Corbin fails to establish himself as a top heel in the WWE. Thus he finds himself in another match to put over another superstar. And when it is none other than the franchise player of the company, you bet a hell of a beatdown will be waiting for him. Despite outside interference from Corbin's hired goons, Reigns will come out on top to make his TLC track record even better.

Prediction - Roman Reigns' WrestleMania push continues at the expense of Baron Corbin as he is set to pick up the win in a match where the odds won't be favoring him.

Despite WWE Universe claiming that the Women's Evolution has fallen short in recent times, TLC will host yet another historic women's matchup which may end up being the main event, as well. (This would be two straight TLC PPVs where women main-event the show) These four women will pull all the stops to showcase their ability in a TLC environment where everything will be legal. Once the clouds of dust are cleared, we expect new champions where two bitter rivals will hold the tag team golds.

Prediction - Expect the return of 'Becky Two Belts' (She could be the Raw Women's Champion and one half of the Women's Tag Team Champions, at the same time) at TLC as she and Charlotte Flair are expected to put an end to the title run of Asuka and Kairi Sane.